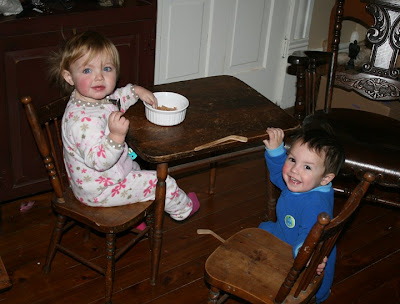 Okay, I’m done the technology bashing.  Actually, it’s really not bashing – it’s just observing. I LOVE technology.  I can’t keep up with it, but I LOVE it. It excites me and challenges me and amazes me.  I intend to be the old broad at the nursing home with the hand crocheted afghan AND a laptop on my knees.  But enough of technology … on to a different stories, albeit one still about ‘letters’. 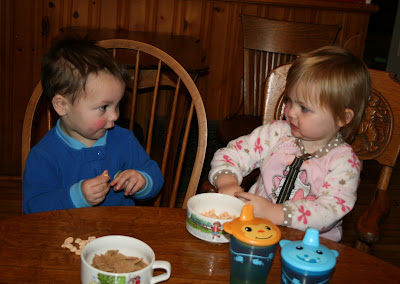 On the weekend we had a camp out here with all five Grands. It’s the first time that the twins stayed without their parents.  Their four parents, which confirms that they are technically NOT exactly Twins.  They were born three months apart to different mothers, but small matter – in my mind they are the closest thing to twins that I’ll ever have in my life. It’s what I imagine it to be, looking after/having twins – such fun to watch them interact and amazing to observe such different personalities. 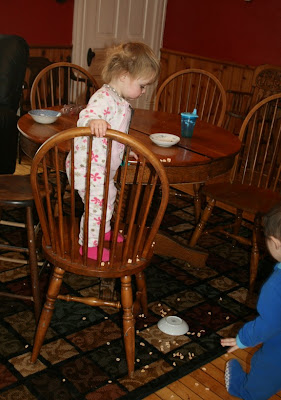 Breakfast with toddlers is … breakfast with toddlers.  More on the floor than in the belly.  I am the Nana so I can buy crap cereal because it’s a treat.  Nana = Treat, that’s the way it’s supposed to be.  But I still like to be semi-alittle-bit responsible, so I chose EDUCATIONAL cereal.  Alpha-bits; known more for their entertainment value than nutritional value.

Of course, the floor was the winner, which is kind of a waste now that we don’t have Abby. She used to love when the kids came to visit. She'd lay there with one eye open, patiently waiting for the rain of miscellaneous substances; never disappointed with the abundance. With no four-legged , the fallout is now manual labour rather than dogual labour. 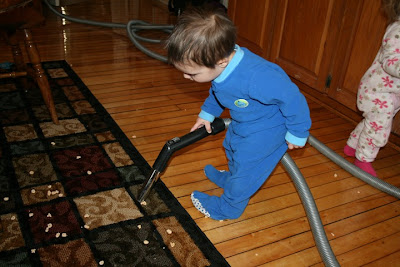 I hit on a idea. At nineteen months, Spencer is a happy, active little fellow and is surprisingly adept at fine motor skills. And he’s busy. Very, VERY busy.  Killing two birds with one stone, I gave him the vacuum and told him to ‘suck up the letters’.  He loved it. He focused intently on the task and did not give up until every single letter had sped down the hose.  And then he turned his attention to trying to suck anything and everything else up … the phone, socks, blankets, . 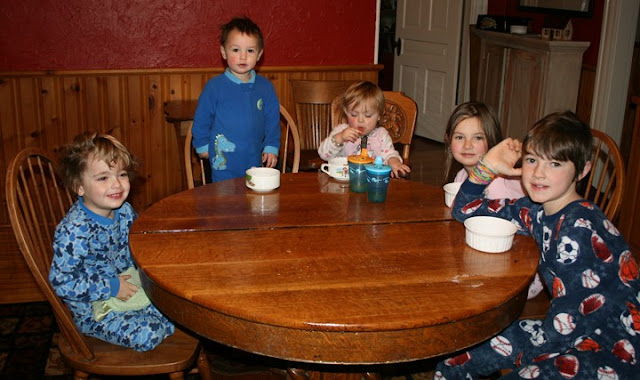 After he left, I noticed that we missed a crop of bits in the living room. Gibson was still there so I thought I’d try the same game with him. Three and a half year olds do not fall for the old ‘Huckleberry Finn’ trick quite as easily.  I had to be a little more creative to get the task done. It wasn’t just because I was lazy or wanted them gone before they were crushed into the carpet – I really did think he’d have a great feeling of power and accomplishment and it had the possibility of being fun for him. 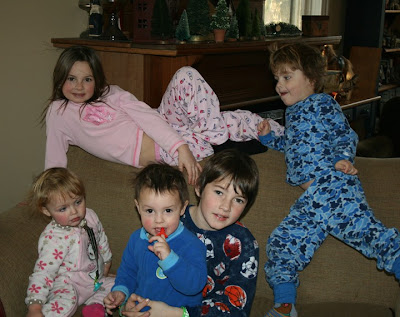 “Hey, Gibby – look how I can make the letters jump into this tube … they’re going on an ADVENTURE!!  Listen to them!  Where do you think they’re going? Look how fast they want to follow their friends!”  It worked …  he enthusiastically went about sending all the letters scampering into the magic opening, off into the unknown, while I went about righting the rest of the war zone.

I noticed him go into the kitchen to the cereal cupboard and reach his arm into the box. I thought to myself ‘It’s so nice when they’re big enough to help themselves when they’re hungry’, and went about my work.  A little while later, after about his tenth trip to the cereal cupboard, I noticed that he was placing the Alpha-bits in little piles on the floor, then sucking them up.  ‘Gibby – what are you doing? Aren’t you eating those?’ I asked. ‘Nope,’ he said …still focused and intent on his mission ‘these yetters want to go on a ‘benture with their friends too.’

Yep … always one step ahead of me.  Or maybe a mile.

What a great idea to have "Grands Camp". Making amazing memories!!!!

Wow, love the shiny floor and new carpet!!
Oh , and the kids are cute too!
Love the part where Gibby keeps getting more....i saw THAT coming!
Glad to see Evelution alive and well again!

It would be so handy if there were 'LIKE' buttons on the comment page ;-) I love comments ... thank you!!