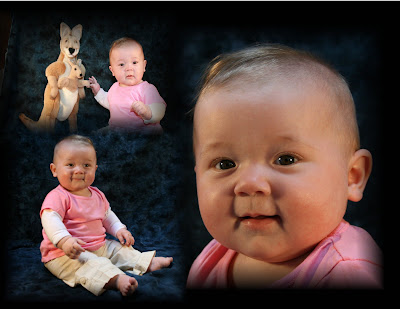 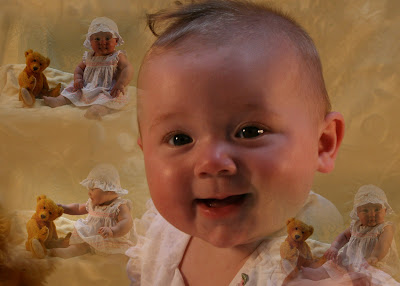 I've been busy getting ready to head to our home in Herring Neck, Newfoundland (just one more sleep!) so I haven't had time to be creating anything.

I did get a chance to play with one of my major passions - photography. I took photos of my great niece. It's the first portrait style pictures I've taken & I had to improvise with a table cloth for a background and two desk lamps for lighting. A five month old is a pretty easy subject - especially one as sweet and photogenic as Ashlyn.
Posted by EvScott at 8:53 PM 1 comment: 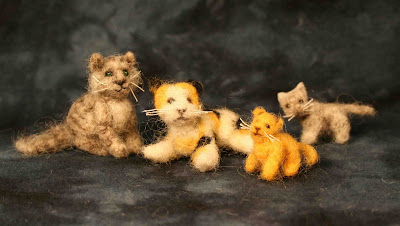 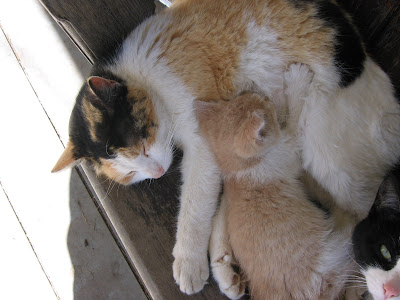 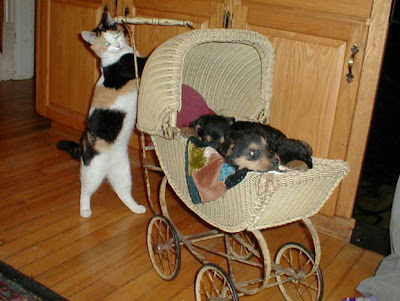 We weren't sure if Simon was being maternal or trying to take the puppies for the 'long walk'.

She's a typical cat - she thinks that everyone should look up to her. 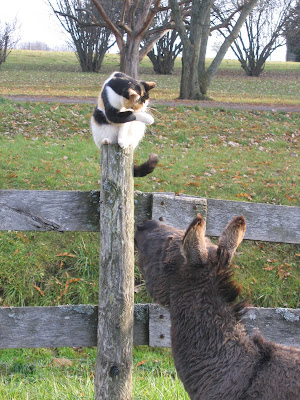 I don't recall ever being without a cat in my childhood & for only a wee short time in our married life. Brian grew up thinking that cats did NOT belong in a house - all theirs lived in the barn. As much as he loves cats, I couldn't convince him otherwise. I went away for a week & he missed me so much, that he got me a little kitten from the Humane Society. We had Rocky for 20 years. She patiently survived four children and watched all kinds of other critters come and go.
The cat we have now, 'Simon', has been with us for about 8 years. She's a sweet cat - she follows me everywhere. Simon has a secret life. She keeps a 'man' tucked away in the haymow. We've caught sight of him numerous times - the back end of him dashing for cover. We're not sure what he eats - but he's fat and healthy. I think she invites him up to the porch for a late night snack.
The cats in this edition of 'Prayers from the Ark' - 'The Prayer of the Cat', is Simon and her mysterious friend - and two little kittens.
Posted by EvScott at 7:32 PM No comments:

The Sister, our last goat, just a couple weeks ago. 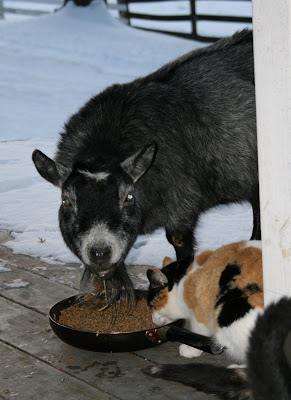 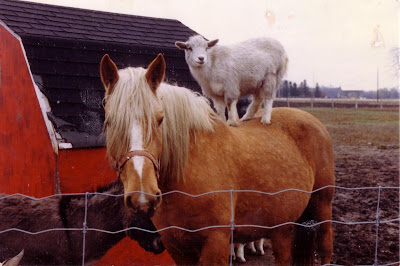 'The Sister', our last geriatric old goat has passed away, leaving us goatless for the first time in 22 years. It's strange to look out the window and see no goat wandering around - always on the wrong side of the fence. So often we'd have people who were driving by, stop in to say 'Your goats are out'. We'd say, 'Thanks, but they live out'. They'd say 'Don't they run away?' Really, where would they go - and why would they go? They had already escaped.
Ashley was our Heidi - they were technically her goats. She got Joseph when he was 3 days old &amp; she got up every three hours to feed him. He lived in the house until he outgrew Pampers. It was hard to convince her when it was time for him to move to the barn. Sadly, he had an accident shortly after that - a huge heartbreak for a loving little girl.
When Emma arrived, again just days old, Brian was so paranoid about Ashley having to go through that again, he wouldn't leave Emma alone. When Ash was at school, Emma went everywhere he went. I would go to the bank or the post office and people would ask 'How's Emma?' On one excursion, Brian picked up a hitch hiker. When he got out, he said 'Thanks man - but I gotta tell ya - that's the ugliest dog I've ever seen.' Another time, he brought Emma to visit us at the lake - her sitting right beside him in the seat of the little Spitfire. Everywhere we went, people would gather - even the chef came out of the restaurant to see her. One lady called to her children 'Come look at the little reindeer'. Another said 'What other kind of exotic animals do you have?' Being Sorta-Farmers, we didn't exactly consider goats exotic. Our son, who was 15 at the time, decided that a goat was a far bigger 'babe magnet' than any fancy car or motorcycle and borrowed her to 'troll the beach'.
Emma went everywhere. She was at church a number of times - which was appropriate as Ashley, when she was little, insisted that they were saying 'In the name of the Father, the Son and the Holy Goat'. One of the favourite images that I carry is of Emma on Christmas Eve. Our very creative pastor made up a story for the children of how there really was a goat in the nativity - so he borrowed Emma. At the end of the service, they turn off all the lights and sing 'Silent Night' by candle light. It is so beautifully peaceful and moving. Amidst 350 people, Emma went to the middle of the aisle and laid down, as if on cue. When the lights came on and everyone was leaving, she wasn't going to be disturbed from her zone. She laid there, calmly chewing on some imaginary cud, while everyone had to walk around her.
Emma, even after supposedly moving to the barn, believed that she was a House Goat. I would come in the house to find her laying on the couch, watching TV. She'd go to the bread basket and help herself. I'd say to Ashley 'Do you know how much it bugs me to have that goat in the house' and she'd answer 'Do you know how much it bugs me to have her in the barn?' Stalemate. Brian was on her side.
It's going to be very strange this year to be able to put geraniums any where I want, instead of only in pots that I hung from the clothes line every night. Geraniums to a goat are like a red cloth to a bull. My flower beds have always been sadly lacking, but we certainly have collected a far greater wealth of stories from the goats than we ever could have from plants.
Posted by EvScott at 8:12 AM 3 comments: 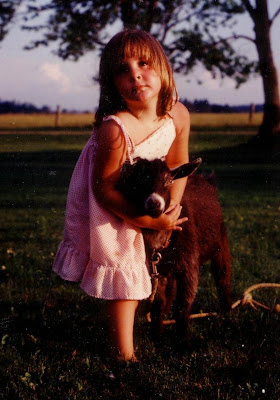 Ashley in love with goats at three years old - with our first goat, Walter and later with her best friend - Joseph, her 'Amazing Dream Goat'. 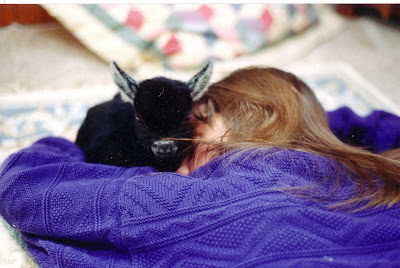 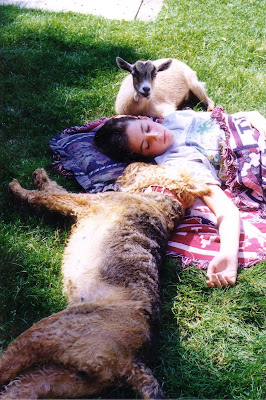 Emma at the beach. 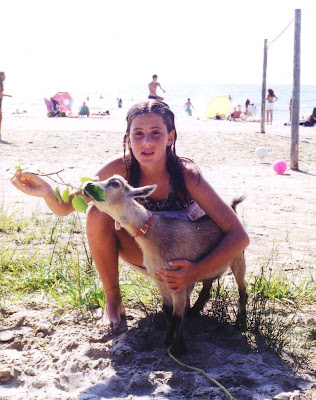 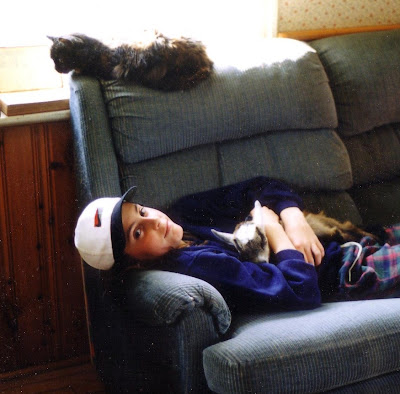 Both growing up, but STILL cuddling... 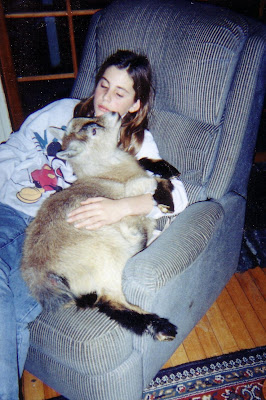 Joseph in his newborn diapers 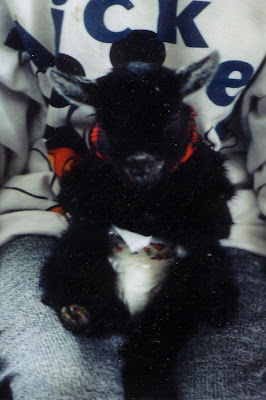 The Prayer of the Goat by Carmen Bernos De Gasztold

Lord,
Let me live as I will!
I need a litte wild freedom,
a little giddiness of heart.
The strange taste of unknown flowers.
For whom else are your mountains?
Your snow wind? These springs?
The sheep do not understand.
They graze and graze.
All of them, and all in the same direction.
And then eternally chew the cud of their insipid routine.
But I - I love to bound to the heart of all your marvels.
Leap your chasms, and, my mouth filled with intoxicating grasses,
Quiver with an adventurer's delight
On the summit of the world!
Amen
Posted by EvScott at 7:36 AM 2 comments: