Whoever guessed an Ark wins

;)
Not real tough to guess - when you see a pile of animals around me, you've gotta know that it is bound to turn into a Noah's Ark.
For years it was basically impossible for me to see any animal without looking for his brother/sister/wife/significant other and turning it into an Ark. I had animals made out of china & glass & wood & resin & plastic & fur ... and what I didn't collect, I made - carved from wood & even sculpted with a needle. Well over a thousand Arks full of animals. One time Jae was helping me pair up the animals to send off to their new home. She said 'I kinda feel like God must, choosing creatures that will be together for the rest of their lives.'
A sweet friend that I met on the e-waves gave me the idea to make this little set. I had to come up with a new Santa to fit the size of the Ark. There's a bit of a familial resemblance in Santa & Noah ... Santa is just the more colourful brother. 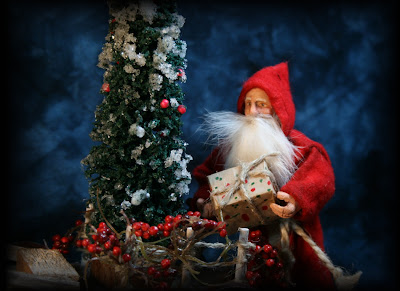 So that's on Ebay this week, along with these two other pieces. Underneath the layers of clay of the painted horse, lives a palamino - it just didn't suit his folky style with his little peanut head - he cried to be a Dapple Gray. He had a sad plastic tail and a phoney mane, so I had to do a bit of an amputation and let him have a real fiber set, suitable to the proud steed that he is. 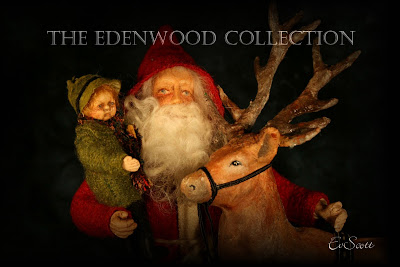 It must be this great Ontario air that stimulates such creativity...
Your creations are always beautiful and speak of times gone by.
I loved the little tale about Pete.
Susan