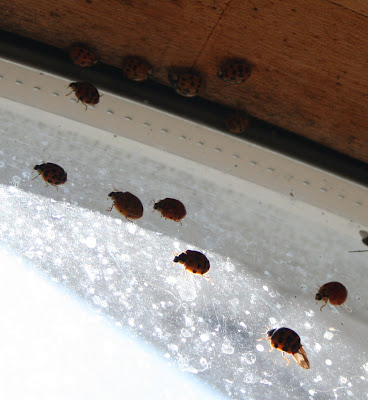 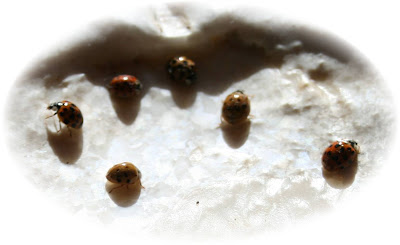 When I was a kid, it was a big deal to find a lady bug. In this area, they seemed to be as rare as a four leaf cover & we considered them as Lucky. You'd gently let them sit on your finger & recite ... which was actually kind of cruel, but well intentioned ... 'Lady Bug, Lady Bug, fly away home, your house is on fire and your children are alone.' Lady Bugs were cute, they were pretty, they were Happy. They were Good. They ate the Bad Bugs.
About four years ago, we had such an onslaught of Lady Bugs that they lost their lustre around here. They became a pest themselves. Thousands upon THOUSANDS of them decended upon us. They'd be flying into your food, you'd be picking them out of your hair. I couldn't even work outside - the bugs would 'ping' me as they hit in a drunken stupor. When you picked them off, they left a disgusting odour. One particular day, a swarm of them went through and covered the outside of the doors in unbelievable numbers. We truly had to sweep them off Brian when he came in the house. Strange & gross.
The last couple years, we've gone back to having a more normal number & we're happy enough to have them again. But I'm wondering if there's a cycle for them & this might be another Lady Bug Nightmare year. My studio window faces the south side. The warmth of the sun has awaken the dozy flies that have been hibernating in the cracks. And Lady Bugs! Hundreds & hundreds of them already - more than I have ever had up there EVER. I do believe that is the possibilty of Too Much of a Good Thing.
Posted by EvScott at 1:14 PM