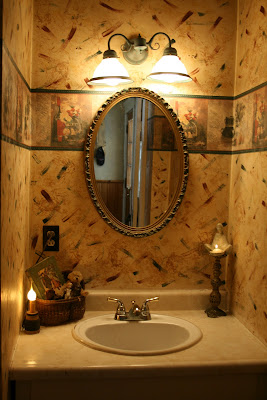 I love colour.  My business/profession has always revolved around it. Light and colour. It’s what I do. It’s what I am.

But for some reason I am grossly inadequate when it comes to picking out paint for the walls.  That is the truth behind why I repainted the kitchen basically the same colour that it has been for eight years. Insecurity.

I see in my head exactly what I want. Most times when I am finished, I am disappointed.  I am true to form this time.

My entry was a kind of taupe/gold on anaglyptic wallpaper.  I wanted fresher, brighter – I envisioned it that way. I chose ‘soft cream’. The woodwork and doors that take up most of the space are painted ‘Mother of Pearl’.  For future reference – there is virtually no difference between Soft Cream and Mother of Pearl. It’s boring. No punch. It's not the answer. 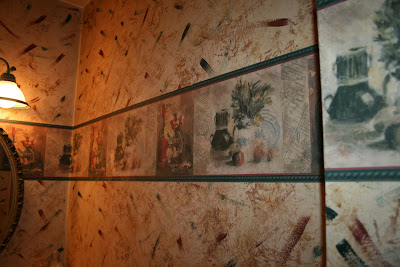 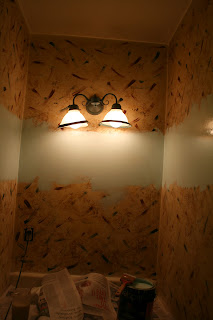 The bathroom has been the same way too long. Some kitchen type border spoke to me and since it didn’t suit my kitchen, that’s where it went.  A huge note to myself, and anyone else who doesn’t want to give up three days of their life scraping glue residue with a razor blade … leave the border in the store.

I am in a ‘fresh-clean’ mode. I picture sea glass. My eye was drawn to one chip amidst the hundreds of other blues. It happened to be called ‘Mystic Sea’. Confirmation that it it was definitely the right choice. It's a big change, which is what I wanted.  The response, however, was less than enthusiastic. 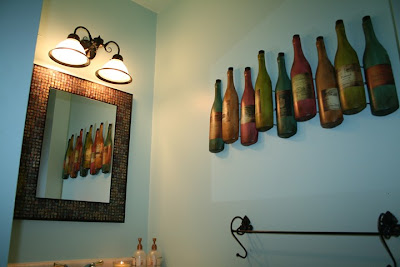 Son & Hubby both, every time they opened the door: “Whoa! That's not the  room to be in if you have a hangover.” Hubby: “My grandmother had that same exact colour in her house in the 60’s. So did my aunt. EVERY house had it.”  Me: Ignore.  Son: “Are you going to repaint it?”  Me: “I’m not sure – I’m living with it for awhile first.”  Son: “Aren’t you going to be embarrassed when your friends come over?”  Friend: “It’s very RETRO.” Me: “That is NOT the look I was going for.”    Son a couple days later: “It’s actually not so bad.”  Me: “Good – I was thinking we might get used to it.”  Son:  “Yeah, you just have to leave the lights off when you go in.” (it’s a room with no windows). I must say, it did shock me every time I went in; it's a very dramatic change. 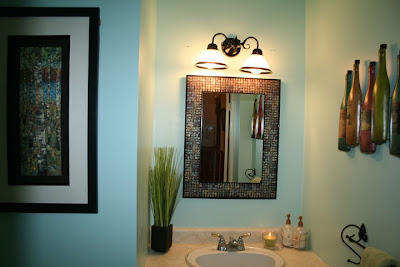 Just as I was going through paint samples to figure out what I was going to do with it, I got the reaction that I was waiting for. It came from my three and a half year old grandson. “Wow!!!!” he yelled when he went in the room for the first time. I waited for the rest that I had come to expect: “It hurts my eyes.”  But instead, he came running out – throwing his hands up in the air and with great enthusiasm proclaiming: “I WUV IT!!!”  Me … tentatively: “Really?” Grandson: still enthusiastically “YES!! I WUV it!! I want MY bathroom THAT blue. My bathroom IS blue, but I like THAT blue better.”

And hence, I have discovered the secret of painting – two things.  #1 Be patient until you find someone who gives you the reaction and opinion you were hoping for.  #2  Invite a three year old over.