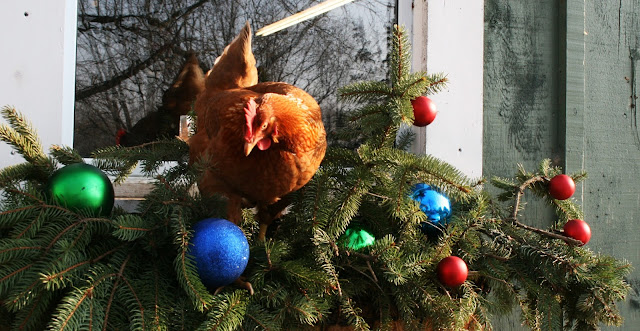 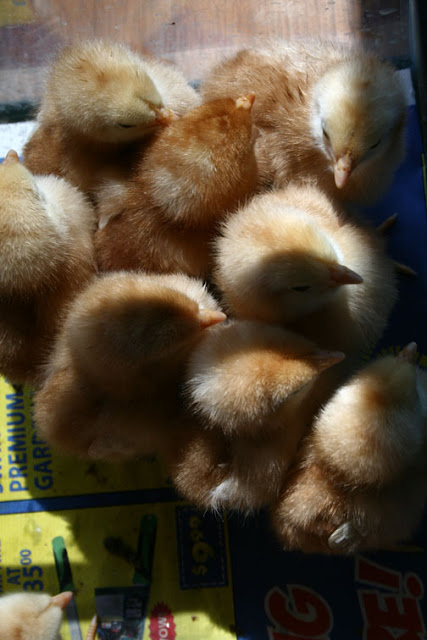 Last spring, Jaime got a dozen day old chicks. I think it may have been something to do with the fact that one of her sisters accused her of raising ‘city kids in the country’ … having no exposure to animals.

Starting as ‘house chickens’, they spent their first few weeks in an aquarium, going outside at regular intervals for ‘chicken recess’.  When they went away, the fowl filled aquarium went with them, riding between the children. All summer, there was a 'sea' of chickens following human feet everywhere.

As they got older, Jae single handedly built them a very cool apartment. Letting them out and tucking them in became part of the daily routine, with Spencer yelling ‘Here shit-shit-shittins.’  On the night of Alyssa’s wedding, there was a momentary panic when Brian asked Jaime: “Who’s putting the chickens away tonight?”  Her aunt kindly agreed to swing around on the way home, and assumed that she’d find the chicken coop in the backyard. So there she was, in her going-to-a-wedding attire, roaming all over the property at midnight with a flashlight, finally finding the abode nestled in the trees on the front lawn. Crisis averted. 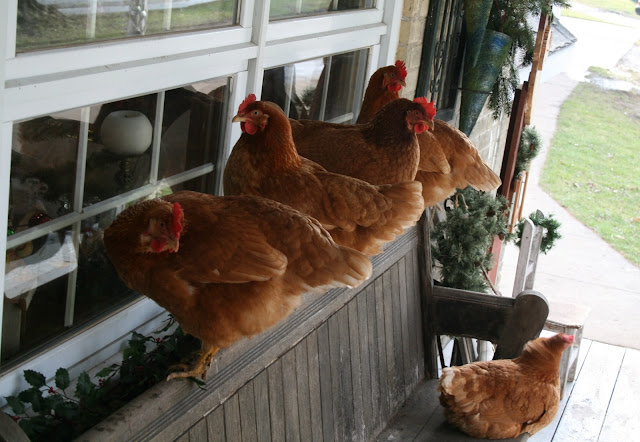 Fast forward to the fall, when it suddenly dawned on them that the chickens could not live in their coop for the winter. Perhaps it wasn’t suddenly – perhaps it was known all along by the chicken owners that the brood would be going to Nana & Poppa’s for an extended holiday. 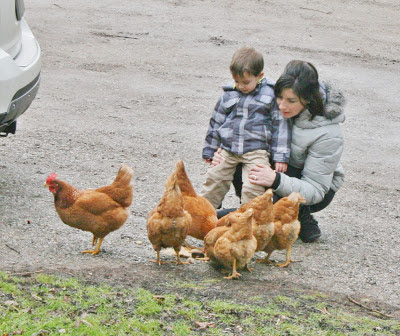 Poor Spencer. At two and a half he couldn’t accept that his beloved ‘chittins’ had to stay here. The first few time he cried – ‘I want to take my chittins home. I MISS my chittins!  Since summer his 's'es have become 'c's, although the initial label is quite accurate. When he goes in the barn, you can hear his excitement echoing right back to the house.  You’d think he’d won the lottery as he’s yelling: “My chittins! My chittins!!!! MY CHITTINS~!!!"

The chittins have been a bit of a challenge for us for the simple fact that they didn’t realize they were. Chickens that is.  Keeping them out of the house took some skillful manoeuvring. They spent much of their time as a ‘guard chickens’, lined up on the bench on the back porch.  Or knocking on the front door, hoping to be invited in. 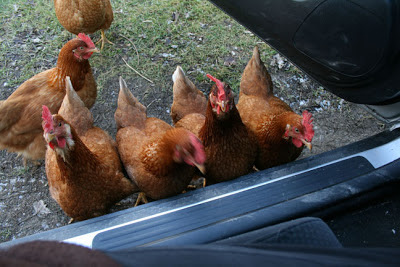 When I'd drive in, the whole hen herd would run to greet me, with little chicken fingers crossed that I would leave the door open for a half second too long. If visitors made the mistake of leaving their car door ajar, they would find the girls happily hoovering up any crumbs and tidbits. I have often looked out to see Brian getting the chickens off of the tow truck, or out of the delivery guy’s car, or acting as crossing guard to keep the chickens safe as people drove in or out. The sign at the end of our driveway 'Go Gently, Kids & Critters Everywhere' has become relevant once again. 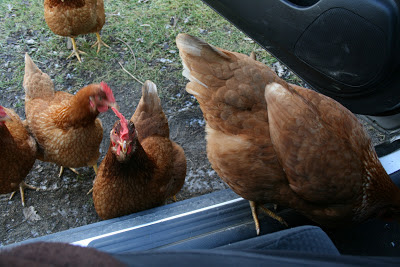 We’ve had many entertaining moments with that poultry posse, and they’ve seemed to enjoy their farm vacation. And I must say, an unexpected bonus was the fresh eggs daily, even though there was a unfounded hesitancy to begin with. It gives me great pleasure to be able to walk right by the egg section in the grocery store. I’ve made more quiche than I ever have, and don't begrudge the 'four egg' recipes. Even Dan said the other day that they were the best eggs he’d ever eaten. 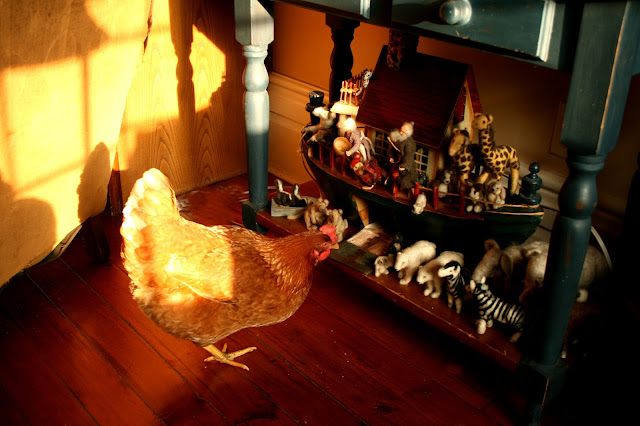 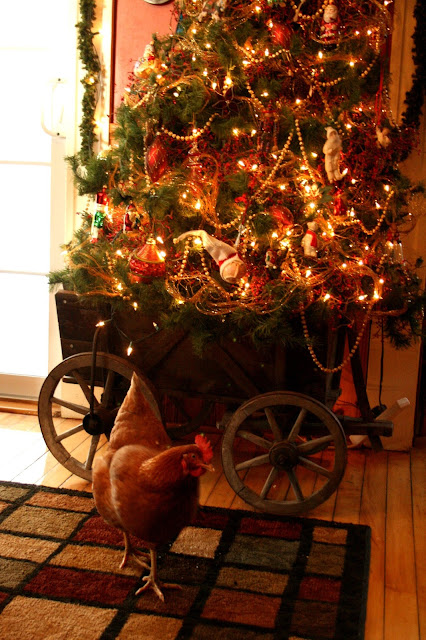 The first few nights of rounding them up was a test of our chicken catching skills, which definitely would have been better twenty years ago. But they soon settled into their routine, happy to be released in the morning. Chickens never rest. They never sit down. They pick and they peck and they scratch with wild abandon. Or they look for trouble to get into. As dusk approached they would head to their condo and settle in for the night, anxious
for some rest I suppose. All but Gerry, who has doesn't associate much with the other five; she prefers a personal escort. It's a well set habit that is working fairly well.

Last night when I went to tuck them in, there were only two in the stall. I called and called, and searched the barn and field before I broke the concerning news to Brian.  He spent an hour with a huge flashlight, scouring the grounds.  We looked in the trees,  and all the little hidey places – the playhouse, the silo, the haymow. And then he took the car and drove all over the lawn, shining the lights over every square inch. 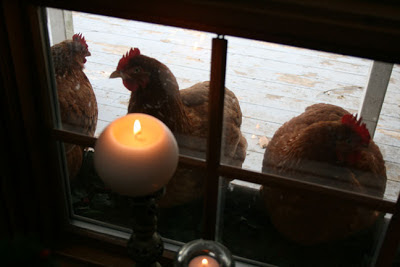 We were both heartsick about it;  feeling so badly for the poor ol’ girls – at the very least, frigid with the cold wind and falling snow. If they had hopped into someone’s car, surely they would have brought them back when they noticed four big red hens. An unexpected ride to town has indeed happened in the past. The only thing we could think was that something came and snatched them away – a very brazen and surprising thing to do in broad daylight. We did see a fox the daytime shortly after they arrived and we worried that he had come back. It was hard to imagine something carting them off, one after the other. Would they not have squawked or scattered? There was no other explanation. 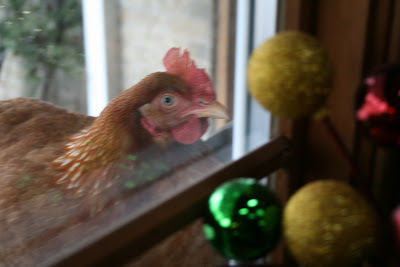 I slept a total of 45 minutes last night, and even that was restless. The vision of the chickens running happily to greet me, kept going through my head. I finally got up at , lit some candles, and tried to get my head around how I would gently break the news to Jaime. Poor Spencer.

When daylight came Brian went on another search. No tracks, no cadavers; not a single feather … but they were definitely gone. 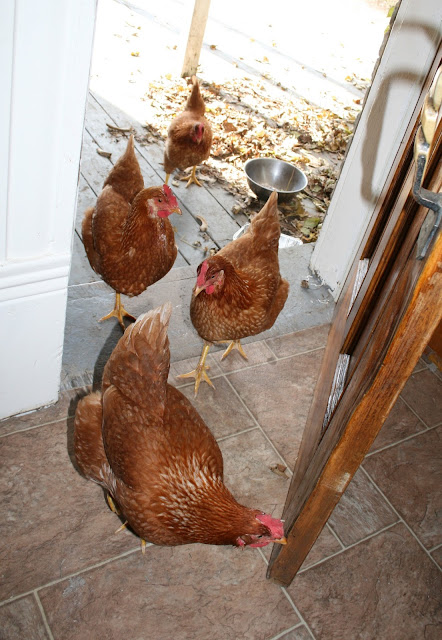 I couldn’t tell Jae such tragic news over the phone, so I drove over to her house. She had company so I carried on to town and put some time in. I passed a poultry truck and thought: ‘There are thousands of chickens killed every single day – why am I so emotional about four plain old ordinary hens?’ Well … because they aren’t plain-old-ordinary. When things move into our family, they become something else.


When I came back, she still had company. I weighed breaking it to her in front of people versus a phone call. Or I could be a chicken and send an email. No, that just wouldn't be right.

I was waiting while she said goodbye to her guests when the phone rang. It was Brian, wondering if I had been there. I heard her say ‘She’s here right now.’  And then I watched her eyes grow big as she said ‘WHAT?! My chickens were missing?! WHAT??!!’ She had no idea what he was talking about. As she handed the phone to me I could hear Brian laughing with relief. 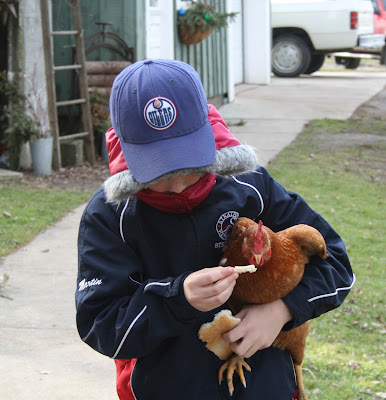 ‘Crisis averted … this time.’ he said. Apparently, a visitor had gone back to his ‘museum’ where he keeps the old cars – a place where we never go between November and April.  The quad squad had followed them in, and then settled down there for the night – either oblivious to our calling or choosing to ignore us because it was roosting time.

With no food, water or warmth, they were fairly happy to see their rescuer. And their friends, who were not impressed with being jail birds, as we had to keep them safe with a predator lurking about, ... were chicken delighted to see them as well. 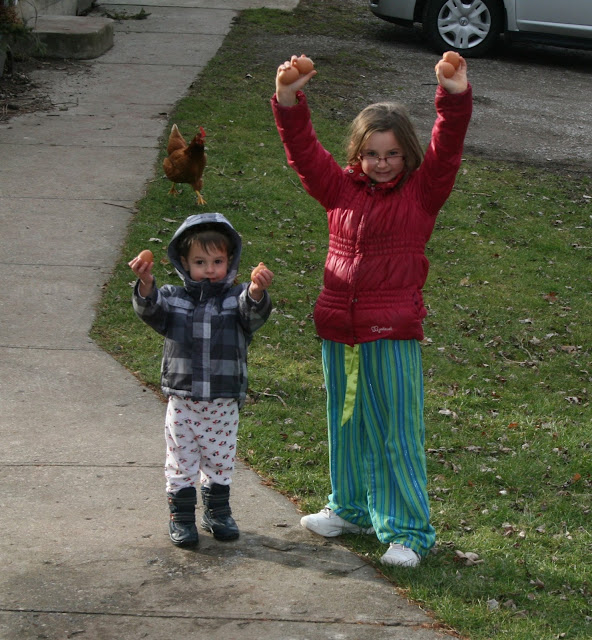 Oh Ev!! I am so glad for the happy ending of this 'edge of your seat' chitten little lost story!! What a long day you had with your great class, and then this excitement and hardly any sleep. I love your blog - your pictures and your stories are wonderful!! Keep up your CreatEV adventures!! And happy full night's sleep tonight :-)

When you were visiting the donkeys that afternoon, I thought it was a strange thing that I only saw one chicken run up to see you. Oh yes ... a better sleep tonight!