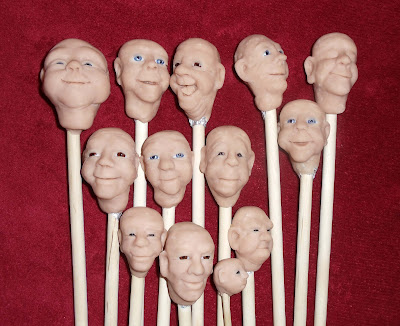 I made reference in the previous post to 'Emma Sally Ann.' I suppose it’s time to share … or perhaps ‘confess’ would be a more accurate word … who she is.

On my perpetual quest for personal growth, last spring I attended Lorraine Harvey’s five week ‘Map Your Choices – Set Your Course’ seminar. One of our exercises was to identify that ‘voice’ we all have – the one that yatters at you and second guesses your decisions. We were to name it and draw a picture.

As if it was waiting a lifetime to be recognized and acknowledged, the minute I sent some thought in that direction, the voice popped right up. ‘Here I am!’, it said. And then, much to my surprise: ‘Me too!!’ It was another. ‘And ME!’ ...yet another, and another, and another.

Within minutes my head was full of voices vying for attention. It’s no darn wonder that I have trouble focusing and find myself going in circles at times. My A.D.D. apparently stands for “A Delusional Delegation”.

One after another they came forward introducing themselves; I could hardly scribble fast enough. I sketched them out and took it to the meeting, which was an hour later as I had, as often happens, left it to the very last minute.

When it was my turn to share, I informed that I did not have just one voice but an entire committee. ‘No,’ she said sweetly and patiently. ‘You just have ONE voice, even though it might sound like different ones.’ ‘No, ’ I insisted: “You have not been in MY head. I have an entire Sybil Syndrome going on in there.” I carried on to share for the first time, the identities of those who had been working ‘in camera’ for all these years.

That month, our topic at WINGS was ‘What’s your story, Morning Glory?’  I thought it was as good a time as any to confess/confirm to the group of 40 women that my elevator might not go quite up to the top floor. 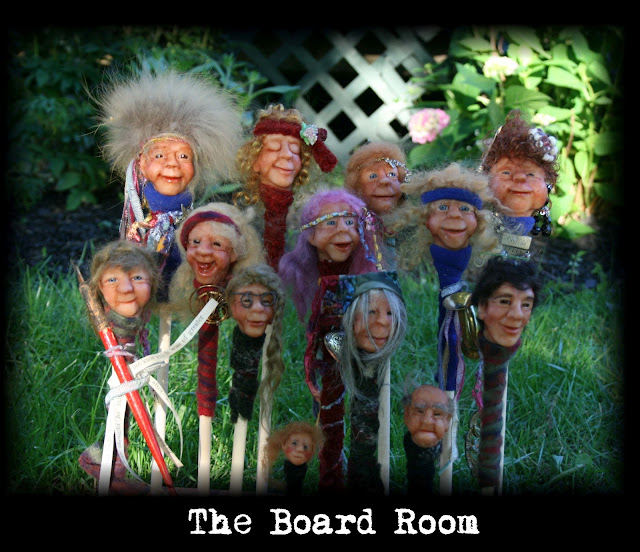 Since the little sheet of paper where I sketched my ‘Head Room’ would not be an effective visual, I decided that I needed to sculpt the Members of the Board.  True to form, I left it to the day before the meeting.  Apparently they were excited to come out of the closet as they literally jumped through my fingertips into the clay.  In less than 20 hours I not only sculpted the 13 heads, but ‘haired’ and embellished them as well. There wasn't time for tweaking and refining - they just are what they are. They are motley crew of Just Heads - bodies would just get in the way and clutter up my head even more.

Before I get to introducing them to you individually, I should say that this process has actually been very beneficial to me. Now that I have identified all the characters that are running my life and commandeering my thoughts, I have, on occasion, been able to take more active control of my head space. I can see who is acting as Chair and as CEO, I can exercise my right to ask them to step aside and let someone else more suitable take over the role.

Seriously, when I have needed to have some extra fortitude, I have called Norma Jean forward. She takes some coaxing at times.  And likewise, when Percy is irritating me to no end, which is generally during the night, I take great pleasure in sending the little weenie packing and inviting Jada to take over the meeting. She used to being Top Dog, but it seems as the board has grown that she is sometimes over shadowed. She is always on standby though and enthusiastically steps up to the plate when given the tiniest amount of encouragement. There are even times when they are totallly out of control, that I call a halt to the whole process and clear the Board Room. It's quite an amazing sense of control. All in my head of course, but then - isn't everything?
Posted by EvScott at 4:40 PM

How wonderful, Ev, that you have managed to navigate (and share!)your psyche so brilliantly and so thoroughly!! You are one "together" lady, even though composed of all those wise and fun characters...

well you are all too kind to say that, Jennifer ;-) It's nice to be accepted as I am ;-D

Ev, I am in awe! How incredible to have identified your board... you have inspired some very deep and introspective thoughts for me! THANK YOU for sharing!!