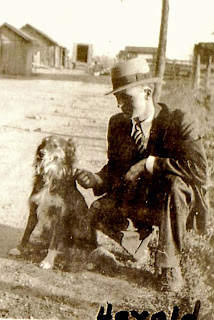 Since I’m talking about people in my life who have made a lasting impact, I really need to acknowledge the very most important and influential person of all time.

Today happens to be his 104th birthday.  My goodness … you can sure tell you’re getting long in the tooth when the people that you’re remembering are over a century old; especially when they’re your own parent. I'm thinking of him today, but that's not unusual; I carry him in my thoughts and in my heart each and every day. 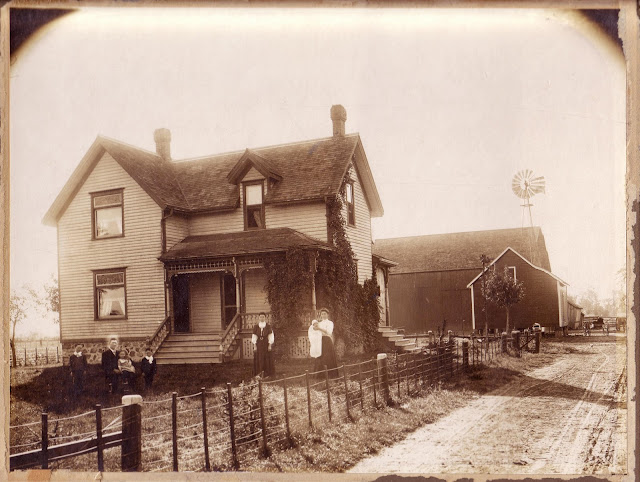 A hundred and four years ago, Ada Mary Wellwood was busy bringing her fifth child, little Harold Francis, into the world; the baby who would grow up to be my father.  He’s the babe that she’s holding in this photograph. Don't you just love these old family photos where they placed people randomly about the lawn.  Why don't we do that anymore? 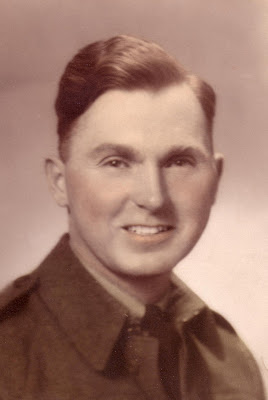 My Dad was 47 years old when I was born, pushing fifty when Bud came along.  Perhaps some of his mellowness in parenting came from living long enough to understand that a lot of stuff really doesn’t matter.  Mostly though, his patience, and calmness was just his nature. I adored that man and had a case of hero worship for as long as I can remember. Still do.

I recall when I was about four years old, holding his hand and walking down the aisle of the church, pretending that we were being married. I shared with my sister that I was ‘going to marry Daddy when I grow up.’ She bluntly retorted: ‘You can’t.’ I didn’t believe her. ‘Why NOT?’ I snipped back, to which she huffed ‘He’s ALREADY married.’

Dad was a pioneer in the sport of harness racing way back in the forties. Since it wasn’t well established in at that time, from March to November each year, he stabled in  or . We’d join him when school got out, and for a number of years we would attend school there for the first few months in the fall. It was a bit of a culture shock, going from an American city school with classrooms and cafeteria, to a rural, one room public school that was lucky to have indoor plumbing.  It was a great way to grow up though, and the fact that our world was so diverse was most likely responsible for my deeply engrained love of adventure. 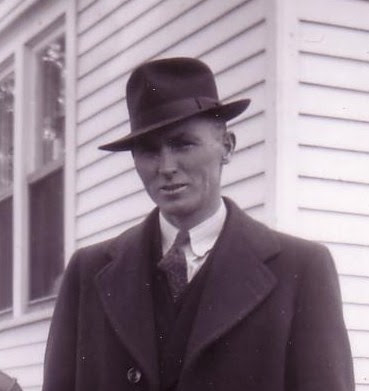 I was acutely aware that he was older than my friend’s fathers, and was always worried about losing him.  It made me hang on tighter and cherish each and every moment we had together. I shadowed his every move, spending all of my time in the barn or wherever he was.  Never once did he make me feel like I was underfoot. Around the racetrack, I had a huge amount of pride that I was Harold Wellwood’s daughter. Not because he was successful and important there; he was, but you’d never know it by looking at him or talking to him. He was humble and down to earth. I was just proud because he was a wonderful man who everyone admired and respected. 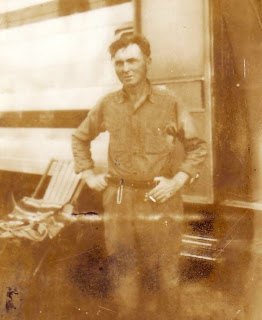 At 63, when others his age would have been retiring, he bought a farm and started farming. He raced horses until he was 74 year old, and still worked on the farm until his health suffered when he about 80. He quietly went about his life’s work with determination, perseverance and humility.

When he died at 83, it was in all of the newspapers across , on the radio and television news and written up in magazines as the “passing of one of ’s best known and respected horsemen”. He was inducted into the racing Hall of Fame in as a ‘Legend’ in 2001, eleven years after his death and has been honoured on other occasions as well as a ‘pioneer of the sport.

In the Canadian Sportsman article where the cartoon appeared above, it said:

‘The world was not always kind to Harold Wellwood but his misfortunes were never anyone else’s burden.  He faced and overcame extreme adversity throughout his entire lifetime, always seeming to find the silver lining in every cloud. His many setbacks never seemed to dull his spirit. Harold was a genuine original, a person who stood by his principle always. In a sport whose records are often short lived, Harold will always be remembered for his style as much as his statistics.

He was a man blessed with kindness, a man rich in his learning and wise in his philosophy, a credit to his sport, his country, and his family.’ 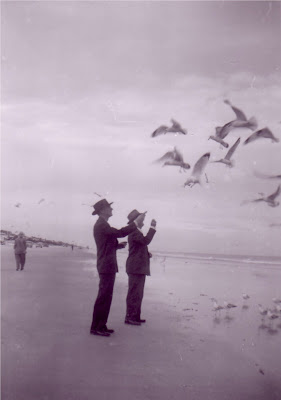 Indeed, he was. He was the first man I loved and he set me up for loving the world. As long as I can remember, I was consciously aware that I wanted to emulate all the characteristics that I admired in him.

I have an audio tape of an interview that they did for the archives back in the late 70’s.  I just can’t bring myself to listen to it – I get all choked up if I even think about.  I should listen to it. I’m sure there is a lot of information that I would appreciate knowing now. And I should, because one of these days, a person is not even going to be able to play cassettes.  I think it might be easier if it was a video, but for some reason, hearing his voice come out of nowhere, just tears me apart. I tried it once a long time ago and couldn't handle it. Maybe now thinking about it is harder than actually doing it. Maybe I'm ready after two decades of not hearing his voice. Maybe. We’ll see. 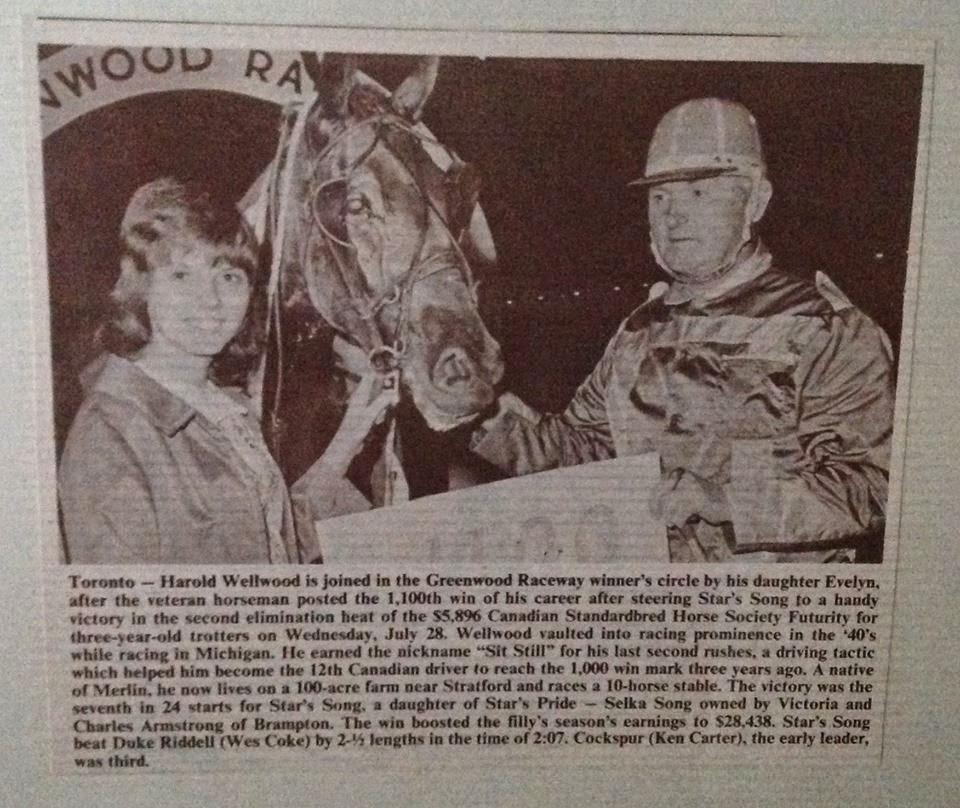 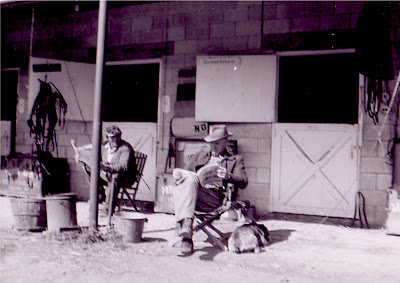 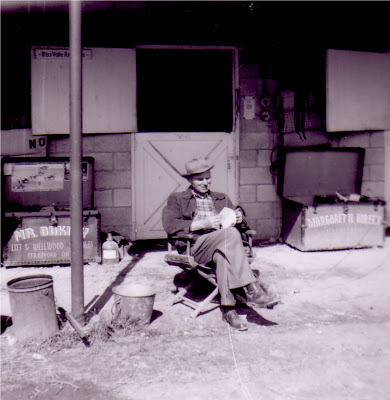 I'd love to listen to it with you.
xoxoxo

Oh please,tell me all about it as soon as you do !!!
But only when you're ready.

Beautiful memories of a wonderful father! No wonder his daughter turned out so awesomely. I have a cassette player if you need one.

Thanks Barb. I had it made into CDs and gave each of my kids a set & actually did get the courage to listen to it. The first bit was rough but after a few minutes it was very comforting & interesting.