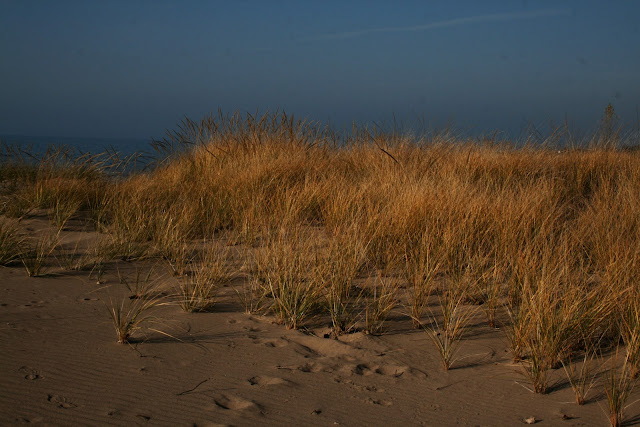 The weather here for this entire year has been nothing short of spectacular. It was reported that the farmers have enjoyed their most bountiful crops in history and that is a quite LONG time.  Winter was easy - we didn't have a single day that we were snowed in (much to my personal disappointment); spring - I can't remember, but I suspect that I would if it had been rainy and miserable; summer was glorious and this autumn has been heavenly.  And NOVEMBER. 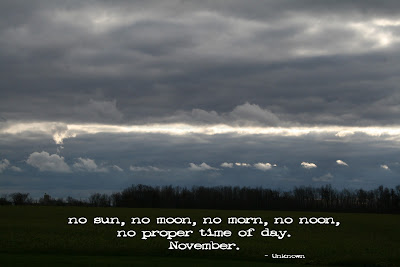 Well ... November to me is a morose month - gray, drab, damp and cold. It's a Nothing month; a pit between vibrant, dancing October and joyful, memory-making December. It could be that I have made it into a major disappointment in my mind because I am so in love with October. Perhaps I feel it would be disloyal to her, considering our intense relationship. December has my attention for reasons other than nature. The internal and eternal light of Christmas offers a soft glow that feeds me.  November has offered me nothing.  November is a shroud that hangs over me,  enveloping me with its grayness.  I am not a fan of grayness. November is IT to me, not SHE.  October, she dances.  December, she glows. November, it hangs. 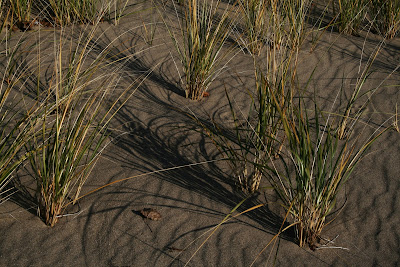 This year is remarkable.  I have not even been able to use the November quote on my Daily Muse blog because that type of day has not yet come. If it weren't for the bareness of the trees, I could call this Indian Summer.


I have been looking for things to do outside each day, even though I should be up my studio, focused on the task at hand. I have been sitting on my back porch, in awe and gratitude. People from the south would not begin to understand what I'm talking about, but people around here surely do. 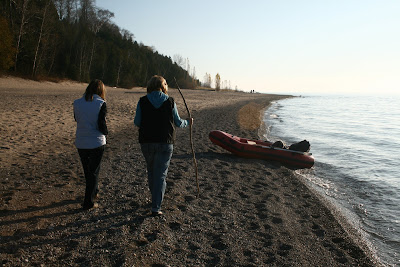 So ... the other day, I was 'sitting in awe' and the lake called me. She said 'COME! Come before it's too late!!!!'  I try to listen to my inner voices, which actually is what keeps me going in circles for the better part of my days. I asked two photographer friends if they wanted to run away with me and spend the afternoon on a photo shoot excursion at the lake.  When the weather is so unseasonably warm, our first thought is that we need to focus on all that yard work that we often get stuck doing in the bitter cold, or the Christmas decorating that usually has to be done with mittens on. So when my friends said 'SURE!', I was delighted. I wasn't overly surprised as they are spontaneous and adventuresome friends - MY kind of people - that's why they are My Friends. They are also very rich in wisdom - knowing that an afternoon spent with friends who share a passion, will carry us further than a raked lawn or clean windows. 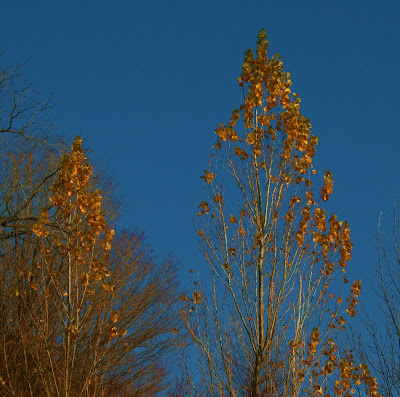 It was glorious. The sky was October blue. The waves, which can be as crashing as the ocean, were quietly lapping in a meditative rhythm. There were brilliant golden leaves lit up at the tops of the poplar trees. They were like celebratory flags, remnants of the autumnal bliss refusing to give way to November. In the distance, it looked more like an illusion of mist than the real thing. It was a soft and gentle day all round. 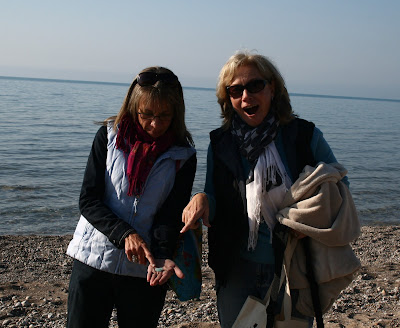 There were treasures found. Interesting rocks and sand scrubbed driftwood but the most significant was a beautiful piece of rare aqua beach glass.  A gem that had been tossed and churned for countless days and then graciously deposited right at the feet of a grateful treasure seeker.


Although together, we were each in our own space and time. The lake allows that. 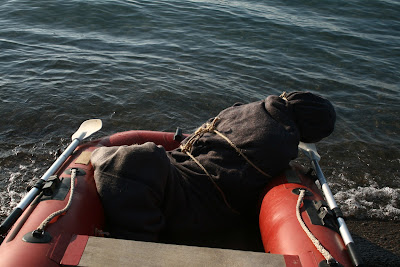 There were very few people there, which added to our feeling that we owned the day and the place. But we watched with interest, a group of young people, in and out of the water in little boats. It was apparent that the group had a purpose, and when we walked by we were a little taken aback by an obviously lifeless body bound up in blanket. We couldn't let that go without asking, so a nice young man explained that they were shooting a movie and that was 'Henry'. We wondered whether Henry was being dumped or recovered, but he couldn't or wouldn't say. The young man, I mean - Henry wasn't talking at all. 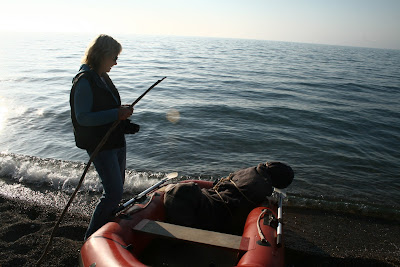 Although it was too late for poor old Henry, we wished the young man well and carried on with our own mission - capturing the day. 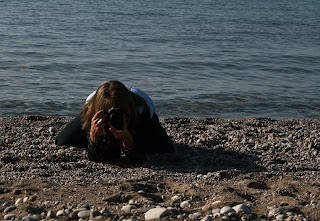 Generally, in my mind, there is nothing to take pictures of in November. Dry and dead leaves, sad and hopeless flowers, withered vines... even the naked trees that I actually do admire, are sullen against the drabness of a timeless sky. Unless they have light and shadow they do not dance and they do not speak to me. But this day, they not only spoke, but they sang on our evening drive home. It was a strangely moody tune of hazey pink that made all three of us feel that we had been transported to somewhere foreign and exotic. It was too elusive to capture, which is appropriate as it was a feel rather than a vision. 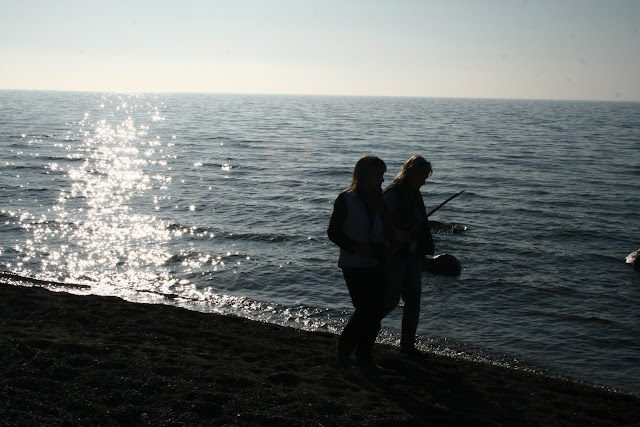 November, you have redeemed yourself in my eyes. You have showed me that there can be another dimension to absolutely everything, even to drabness. I greatly appreciate your gift to me. I wonder though, was that gift, that lesson more about ME than it ever was about YOU. About ME taking the time to see and appreciate what is in front of me - black or white, colour or gray, naked trees or vibrant. About ME needing to be told again and again and again: "Everything is something." 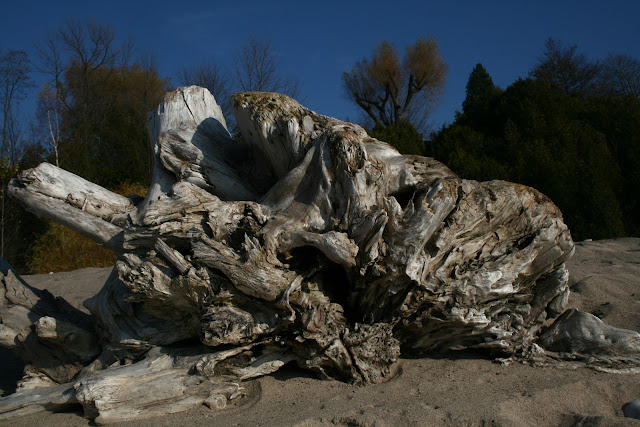 YEAH>>>>YOU DID IT!!!!!!!
You ROCK woman! These are greeaatt!So nice to have the story written. A memory , now we can all look at anytime we want!You should have asked me to send one with YOU in it! Can you still add one? I have the one of you two taking a pic of me.
Love the photos! I really dropped the ball that day...notin' nice really , but that's okay. I love yours!! Love the old driftwood one. And the shadowy grass!!
And....I got lots done yesterday in the decorating department...and who cares about those windows anyway?/ It's all good!!!

Nope, can't add any more - not possible ;-) Especially with ME in them. Will look forward to seeing them though. Glad you made up for lost time. But it WASN'T lost was it ... it was FOUND!!

It's so hard wanting to get out enjoy when there's so much to be done. But, you did it! What a beautiful day for it too.

Ev, I've wanted to ask you about your Noah's arks. I really have been wanting to make one for my children. I can carve the people and animals, but it's the ark that stops me from even starting. Do you have a book with designs on how to make an ark? I have no idea how to make it curved in the front and back. Any ideas on how I can get plans to make one?

First time I built one - way back in 1988, I was at a woodworking class. The teacher asked me what it was - A BOAT! I told him. 'Doesn't look like much of a boat' he told me. He was likely right, but it was the best I could do at the time.

I searched the internet for you and had no luck finding a design or blueprints. I made my own design & if you have the equipment you could surely do that.

I plane my own wood, then I laminate it together (glue it in 5 layers). I weight it down with a jack system, let it dry for a long time, then cut out the shape of a boat on a 45 degree angle. Then I have a LOT of sanding to do. It's really hugely time consuming, but it likely looks more like a boat than my first attempt.

Another thing that I do, that makes it very rustic and works great: find a really dry log - cut it the length that you want it, then slice it in half with a chain saw. With the chain saw, shape the front in a point and the back rounded. I use dowels and rope for the edge, and paint the bottom.

Don't let that stand in your way Jill - just go for it ... even if someone tells you it doesn't look like a boat to them! You'll come up with something wonderfully creative.

You could try making a skeleton out of wire, then putting layers of papermache on it it, if you're not crazy about the wood equipment.

Let me know how it goes!
ev

Wow! The first suggestion is waaaay beyond me. The second I can try...or at least get Ted to cut it out for me. I'll use bandsaws, but draw the line at chainsaws!

I've considered papermache, but was really hoping to work with something more solid. I do LOVE wood!

I even considered trying to find a "trencher" or dough bowl. They're long and curve up like an ark. If I can find one wide enough, that's not astronomical in cost, I may try that.

I'm so scattered anymore. I'll spend weeks needlefelting Santas and children. Then I'll papermache, then I'll carve, then I'll make bookmarkers and tags with paper. It sometimes frustrates me that I can't focus, but then I think of you. I like your outlook on how there's just too many fun things to try, rather than trying to master one thing. I've got to go with that thought more.

Good hearing from you!
Jill

Everything is Something. It is all in the way it is looked at or perceived.

You write so eloquently, Ev. Your words flow with such ease and it is almost as if your pictures through your words, speak to me.

So very beautiful, breathtaking really. November to me, has never been gray. It is beauty. I am glad SHE redeemed herself with you.

Thank you for the journey.
It is so wonderful that you have friends to share such a beautiful moment with.

Have a Blessed Thanksgiving. Each of us have so much to be Thankful for, I know I do.

Thanks for your kind words, Tonya. Where exactly are you, that you don't have Gray November? Not SW Ontario, lol. I know that not so far south of us, the leaves hang on much later. I like COLOUR!!!!!!!! Definitely THIS year though - I haven't minded November a bit ;-)

where to buy xanax online does 2mg generic xanax look like - 1.5 xanax high