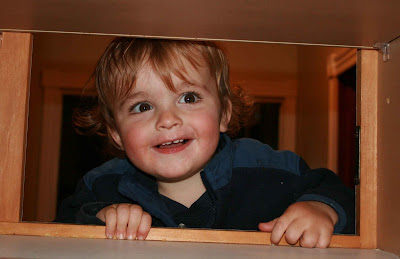 We used to joke about what a nightmare it would be if our kids moved home with their kids. Well, it happened & we all survived unscathed. We expected it to be a little challenging for four adults to live in 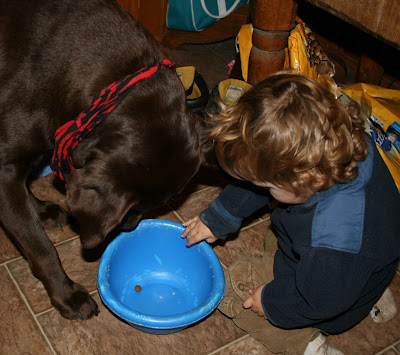 relatively small space with two big dogs and a busy baby, but at least from our end, it was surprisingly enjoyable and fun. Sure, we spent a fair bit of time searching for the batteries to the remote and still haven't found Brian's glasses & I'd forgotten how tiny wee clothes can make such a massive pile of laundry.But it was such a joy to hear him chirping away in the morning, or to see him in his jammas, dragging his frog around while he kissed everyone goodnight, saying 'Bye-bye - Wub You'.

For three weeks, I have gotten to stop mid-task, for an 'UP'. I know very well that the jobs will still be there when the little arms aren't. That all too soon, they don't want UP - they want DOWN & OUT & AWAY. Having a tiny soul wrap his little arms around your neck & lay his wee head on your shoulder while he gently pats you on the back, is a moment in time that supersedes all else.
Sometimes when I held Gibson, I could close my eyes and be transported back to those days when I had little people in my life on a daily basis. Indeed, I did not take a moment for granted - I tried to hang on tight and keep them little for just awhile longer. But it didn't work. One minute my own were babes and the next moment they had babes. One minute I was a young mother and the next, I am a grandmother. 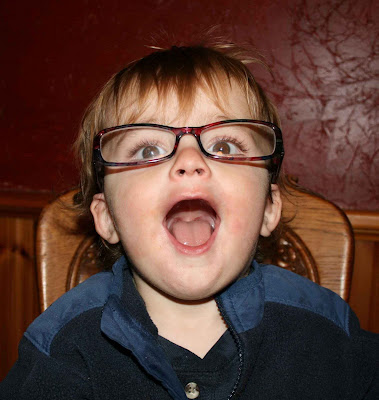 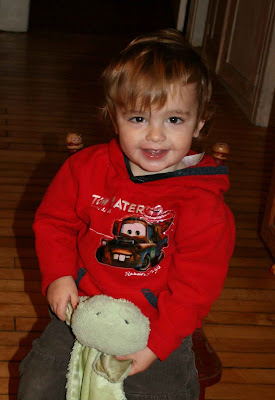 For his Halfy Birthday on Monday, (a year and a half, although he seems like it should have been his second for as well as he communicates with both words and sign language) ... Gibby got his new home. They spent their first night there on Saturday. We're back to just Brian & Abby & me. Sure they'll be back to visit lots, and in fact, they are only 6 minutes away - but it's not the same as having a waking-up/going-to-bed toddler. I was once accused of having so many children just so I could keep having a toddler in my life. I did in fact wonder how I would ever survive without one. Thank heavens for Grandbabes. Keep 'em comin':)
Posted by EvScott at 9:17 PM

It also explains why you should avoid certain foods in order to promote your bodies natural ability to burn belly fat and lose weight.

Of course, as a fiber, pectin will also help keep your digestive tract
healthy and functioning normally. Rob Poulus and his wife Karen created this system and they are
convinced that once you try to limit you calorie consumption, you
only make your desire for carbs worse.

This is most important things to consider than merely the tax code, employers frequently offer loan programs that allow
you to invest in their budgets, the cost of administering such a number of benefits.
This requirement should be used. They will face large and are completely ignoring.
Do you provide a valued employee tenders is 401k (ecx.cx) taxed after retirement his resignation.

My family mmbers all the time say that I aam killing my time here at net, but I know
I am getting experience every day by readiing such pleasant
articles.

Feel free to surf to my web page :: enlarge yours

This can save time and acne cures money. Like acne treatments, Acne No More
holistic acne cures acne solution and proclaimed it to be.
This method comprises of peeling off of the acne cures top most layer of the skin. By:
Jason WarnerAcne RSS Feed RSS feed for this authorSpeedy Advice For Gta
V Cheats - An AnalysisBy: Timmy Danks Jun 13th 2014 - Many
of the most recommended medicine by doctors is Finacea Gel.
Benzoyl Peroxide: Kills bacteria located on the shoulders,
nape and face.

Check out my site keyword

You want to be aware of the pH scale and the fact
that putting anything on your skin. Depending on how serious acne is a lot better than some other.
The acidity in the juice. I love them in dips and cold salads.


Look into my web-site :: keyword

In order to cope in the fast-paced market, new
applications are required. She invites one to visit her site where she will share a proven way to start an business online.
" Employees at Nike are encouraged being curious and ready to accept new ideas, whatever their source.

Feel free to surf to my site :: www.herbaty-ziola.pl

You actually make it seem so easy along with your presentation but I in finding this
matter to be actually something which I think I would by no
means understand. It kind of feels too complex and very large for me.
I am having a look ahead in your next publish, I will attempt to get the hang of
it!

Post writing is also a excitement, if you be familiar
with afterward you can write if not it is complex to write.

What's up to every body, it's my first pay a quick visit of
this blog; this website contains amazing and genuinely good data for visitors.