Last night was our annual Candlelight Christmas Service at our Little Church in Avonbank. 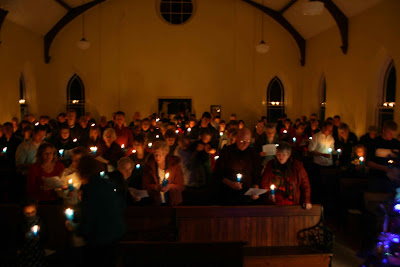 As always, it was a totally magical evening - friends, neighbours and family coming together to celebrate Christmas the old fashioned way - with simplicity & fellowship. With the little Church aglow in candle light and our voices are united, singing Silent Night with such tenderness, it is the Season at its best.
Other than for the annual cemetery decoration day and one wedding, the church sat empty for 35 years. When Jaime and Nick were married there in 1999, there was a comment that it was so lovely that someday we should have a Christmas Service there. I suggested rather than 'someday' we needed to just Do It. We stuck fliers in the neighbours' mailboxes, got someone to play the old piano and read the Christmas Story. The place was full. It was heartwarming to see all denominations come together in the true meaning of Christmas. 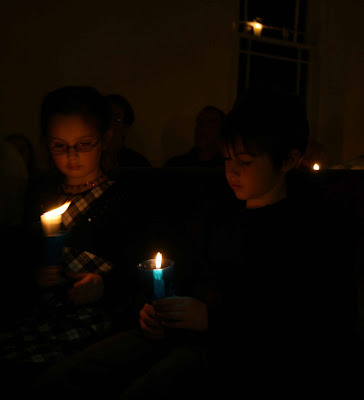 Back then, the pews were filled with families with growing children and young adults. As we've come back each year, we see a noticeable difference in how the children have grown. The family pew in many cases has dwindled for a time as teenagers moved off to university or out of the area. And now, moments later it seems, they are back with children of their own, creating their own tradition. And now the ones that were the parents are the grandparents. My own three grandchildren were there - our family has grown by 5 since that first service.
Last night we sang traditional Christmas carols; two grandparents sang with their wee grandchildren and a professional storyteller told the story 'The Clown of God'. Lauren must have felt that the service really was about the music. She went downstairs to check on Ashley & Gibson - came back up to see what was happening and went back to assure Ashley that she wasn't missing anything - the 'commercial is still on'. (The storyteller). She likely thought the same when I was speaking. When I am doing the closing, they're right up there with me, which makes me so proud and so happy. There's not a hope my own children would have joined me, but they are quite comfortable hanging being my assistants.
This is what I shared this year - adapted from Howard Thurman:
The Work of Christmas Begins:
When the song of the angels is stilled,
when the star in the skies is gone,
when the kings and princes are home,
when the shepherds are back with their flocks,
then the work of Christmas begins.
to find the lost,
to heal those broken in spirit,
to feed the hungry,
to release the oppressed,
to rebuild the nations,
to bring peace among all peoples,
to make a little music with the heart.
To radiate the light of Christ,
every day in every way,
in all that we do and all that we say.
Then the work of Christmas begins.
Posted by EvScott at 3:26 PM