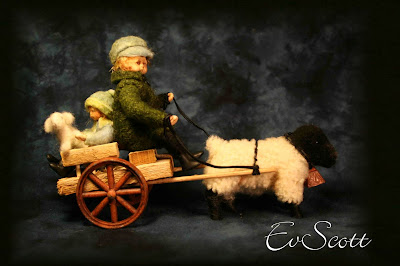 I seem to be as slow as all get-out this week ... here it is Thursday and I haven't even updated this with my current Ebay offering.
I have no excuse - other than that I have been catching up doing fun things, like laundry and cleaning and running around doing errands. All the things that I let go when I wasn't home for fifteen minutes all week. 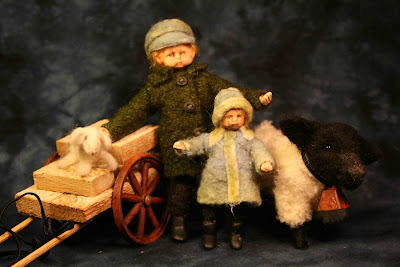 Off to Allen, Texas, these little guys are ... sounds like a wonderful place to go!
This little set has the first Suffolk sheep that I've done. Which is kind of strange since I LOVE Suffolk sheep. When we moved here 21 years ago, we raised them.
We lived on just an acre of land, so having a farm gave us the opportunity to be 'Farmers' and sheep seemed like a good idea at the time. We got 40 ewes and two husbands - Rambo & Ramsey.
I love the peaceful scene of sheep grazing, and I was sure that it would be oh-so-wonderful to have those adorable, ever-so-sweet baby lambs scampering around. Is anything cuter? (Except donkeys of course). But sheep farming is NOT as easy as it looks - it takes knowledge and expertise and a different heart than I've been blessed with.
Lambing time is huge work & the ewes or little lambs can run into difficulties. One time that sticks out in my memory, I was sick & laying down. Jaime, who was 11 at the time, went out to the barn to check the ewes & found one labouring in distress. Rather than disturb me, she called her Dad at work and asked him what to do. He said 'Go inside her with your arms, right up to your elbows, & pull the baby out'. Well ... she did. I still totally marvel at how independent and brave she was. She delivered two little lambs that were very weak & couldn't stand to nurse. It was a frigid, cold night so we brought them into the house & put them in a cozy box in front of the woodstove so we could feed themwith a bottle every half hour. It was New Year's Eve & we were watching 'Old Yeller' on TV. Jaime went out to the kitchen in a commercial and came back crying. I said 'Old Yeller makes me cry too' ... she said 'It's not that ... my lambs died and it's not fair because I gave birth to them.' And it wasn't fair. Every time we lost a little lamb, it broke our hearts.
When we were told, very matter-of-factly by an experienced sheep farmer- 'A sick sheep is a dead sheep.', we were horrified. Of course, it's not necessarily true I suppose, but it was enough for me to decide that sheep farming was NOT the answer. That, and the fact that it was getting hard to keep myself convinced that every single lamb was moving off to a loving home where it would have a long and happy life.
No more sheep farming for us. I'll stick to watching them graze somewhere else and just make my own ... knowing that in fact they ARE moving to a loving home where they will live a long and happy life.
Posted by EvScott at 6:28 AM