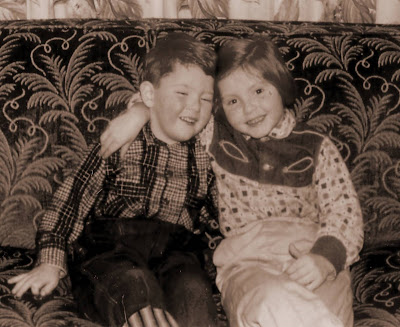 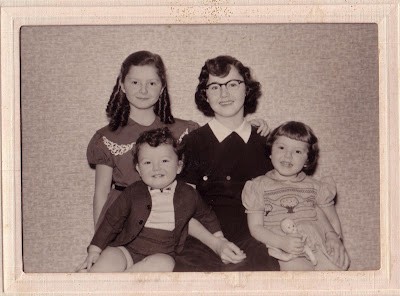 At times, when I create a head, I find that I am holding in my hands, a face whom I recognize. It's a little disconcering when that happenss & totally unintentional - I sure couldn't do it if I was trying. It's such a surprise & it makes me smile or laugh or ponder. This time it brought a lump to my heart.

I created one of the wee children that I so enjoy - the ones from the antique German doll. Each time I make one, it comes out a little differently. When I adorned this little fella with red hair, there in my hands, was my 'baby' brother, Buddy. Not 'Bud', the guy he grew to be, but 'Buddy', the pudgy faced little boy with our signature auburn hair.

He was the last child in our family of 7 kids - 22 months younger than me. Prior to his birth, my parents had lost two sons & a daughter (my oldest sister actually died as well - from leukemia, just a couple weeks after the picture above was taken) - so the arrival of this long awaited boy was a major deal. He was named after my Dad -'Harold Joseph', but the story goes that I announced that he was my 'little budder' & hence he became 'Buddy' - Bud as he got older. 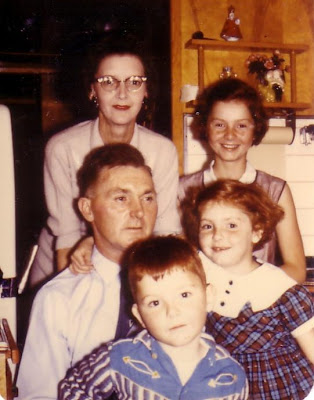 My sister was five years older than me, seven years older than him - far too mature and sophisticated to be hanging out with such irritating babies, so we teamed up against her. We lived in the country, with no other children nearby, so for my first 11 years, he was my only friend and playmate.

I forced him to play 'house' with me; I played 'trucks' with him. We spent hours and hours with Tinker Toys & Lincoln Logs & pre-Lego little plastic red bricks with windows that you could set in that actually opened.

I was far more the 'animal lover' than he was - he preferred a fishing rod. When we left the electric train & doll house behind, I went in my direction - to the barn to be with the horses & my pony & the kittens. He went to the creek & fished and caught all kinds of disgusting slimey creatures.

He was about 7 or 8 when he stayed at the trailer with my Dad - Mom, Pauline & I came later. Like it was yesterday, I remember my Mom tucking him in the top bunk & he said to her - "Be careful, I'm missing my frog." She squealed & said "OH NO - we have to FIND IT!" He said - "Don't worry ... the snake will probably eat it." And there, curled up in the covers with him was his latest pet. 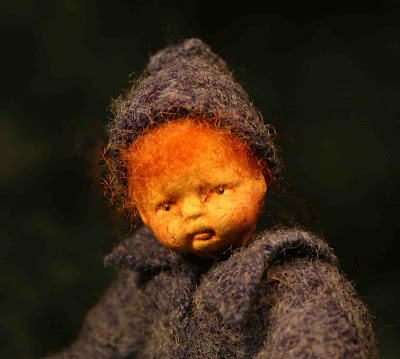 He wasn't nearly as attached to the fur type animals as I was, but he did get attached to a couple strays. We lived on the edge of the village & too often animals were discarded right in front of our house. One particular dog, Bud became instantly attached to, which surprised me, as I was the one who was always wanting to keep every stray I found. She was a real Boy's dog, a big German Shepherd he named Lady, who became his constant companion. It made me happy to see him love a dog. One day, I found him hiding in the corner of the garage, crying. It took forever for me to get the reason out him. He just kept saying 'It's my fault, it's my fault.' He had been walking on the side of the road, right in front of our house, with Lady right at his side as always. She went on the road, was hit by a car & killed instantly. The car that hit her didn't even stop - just left that poor child standing there to deal with the trauma and a broken heart. I never saw him get attached to any animal again until he was an adult. 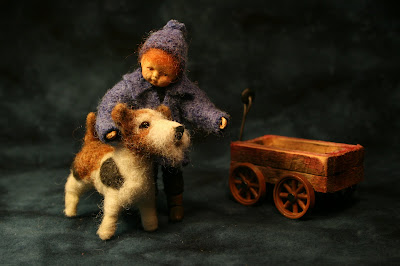 The Terrier in this piece is from one of my very first memories of playing with my brother. He was three, I was almost 5 when my Dad got a baby raccoon that we raised in the house. One of my favourite toys was a Terrier on wheels - we'd stick the wee racoon on the dog and pull the poor thing all over the kitchen - little 'Tiny' hanging on for dear life. 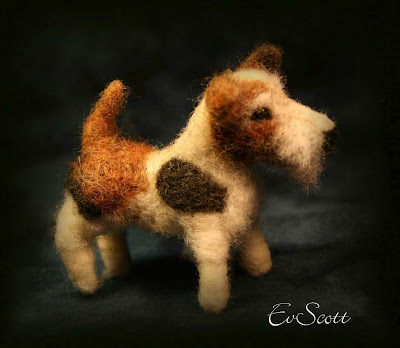 Bud passed away suddenly, eight years ago. I miss him SO much. He is always in my heart and so very often in my thoughts. I see him though as the man who he had become - tall & handsome with a grin and wicked sense of humour. But this week, when I put the red hair on the little child that I made, there he was, my little 'budder'. Suddenly all those childhood memories came flooding back ... the dog, the raccoon, the fishing pole, the pudgy happy face ... my Buddy.

I am so touched and honoured to get to send Buddy & his buddy off to Clare, Michigan, to join numerous other creations that have come from my heart and hands over the years. 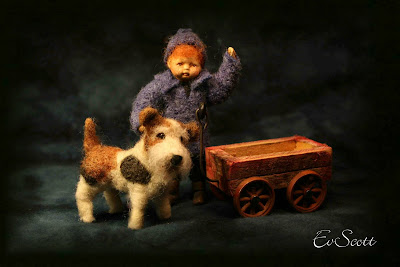 Your work is charming, and what a very sentimental piece you have created here :) How sweet!..... Thank you for your kind email as well... I always appreciate notes of applause from fellow artist friends!