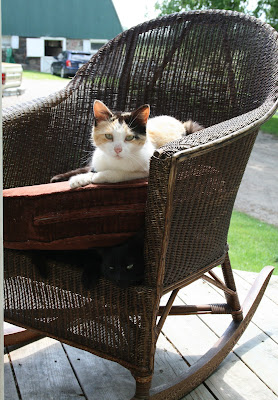 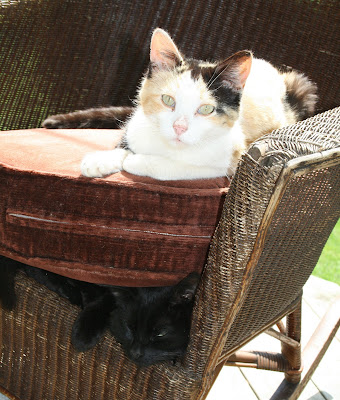 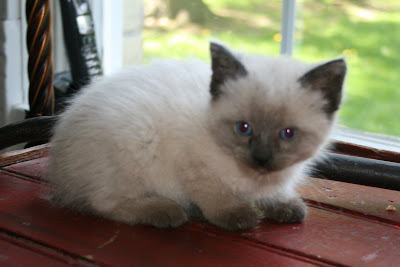 I love animals and I love to 'love' them, so it's a slight irritation to me that we have a semi-feral cat who is quite willing to accept our food but not our affection. I say 'semi' because she rarely moves three feet from the back door - she lays there like she's actually part of the family. She runs after me with the food, but if I try to touch her, she's off like a shot. For YEARS now - you'd think she'd eventually start to relax and accept that no there's no threat.
The fact of the matter is that she's an imposter. Simon had a kitten, that we named Hank, who we couldn't catch, so we weren't able to take it to its new home until it was a teenager. A week later it came back. Took awhile to catch it again & we took it to another home - a wonderful dairy farm more than 5 miles away. She came home again & started nursing from Simon even though she was just as big. Brian mentioned to the farmer that the cat had come back again. He said 'No, I saw that cat this morning.' So the Hank at our house was an imposter - we named her FRANK - for Faker-Hank. We did try to take her to another home again, but back she came, although we don't know why as she doesn't even like us.
It's not that we would mind Frank hanging around, but she's a loose woman and every year, there we are with yet another litter of kittens that we have to find homes for. She keeps away from us until they're suspicious and hissy - which makes them harder to catch, so they wind up barn cats somewhere, which is disappointing for me as I'd rather see them be part of a loving family. 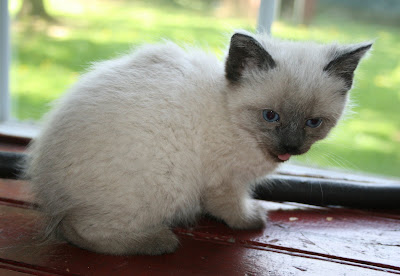 She has the most consistently common set of children - can't-tell-one-from-the other black kittens with not a lot of appeal, being both unfriendly and non-descript.
On Sunday she moved her kittens up to live under the porch - her usual drill when she thinks it's time for us to provide the milk supply. Brian had thought that she only had one single black kitten & that was good news. We stood quietly and watch another come out, then another & another & another & another. Four of the same old hissy black cats... here we go again. And then suddenly ... there was this little fellow! The most beautifully marked, gorgeous kitten with remarkable blue eyes. She let me pick her up immediately, cuddled in, then purred when I gave her milk. She has a loving home already - the first person who saw her scooped her up. I'm so happy that she will have a loving home as she is going to be an exceptionally lovely cat.
Meanwhile, under the porch, her four black siblings are wrestling and breaking down my plants and spitting at me when I have the nerve to walk by them. And good old 'Faker Hank' is telling them - 'I know these suckers that will feed you for years and you don't even have to let them touch you ... just watch me.'
Posted by EvScott at 5:46 AM