Members of the Board

One by one, here are the characters running my head. You need to read the previous post, 'The Sybil Syndrome' in order to make any sense of this. 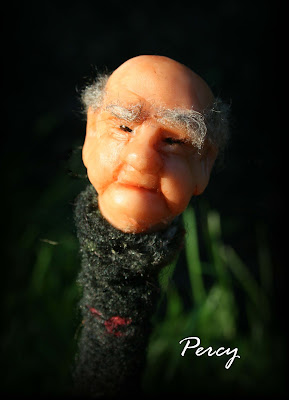 Percy.
He is a thorn in my side;
an irritating little weenie.
He works the night shift as a
self-proclaimed auditor.
He persecutes me
with useless details and data.
When he's working, he drags out all the files -
one after another -
and leaves them all open.
He is petty and irritating and refuses
to listen to reason.
He will NOT accept that there
is no need to dredge up stuff
that has been in the archives for years.
Being so persistent,
he wears everyone else down
to the point that they run away
and hide, so there is no one left
for moral support or distraction. 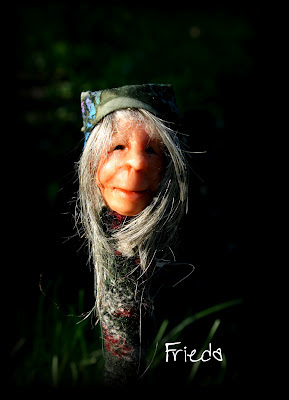 Frieda often works the night shift too.
In fact, I am suspicious that she
and Percy are having an affair.
He tries to impress her by getting as
many files open as possible.
She then goes through them
with an Eyore-esque
'woe is me';
fretting and fussing about
stuff that doesn't matter
in the least.
The rest of the board finds her
quite tiresome and they don't mind
telling her with an exasperated:
"For heaven's sakes, Frieda - get a Life."
Of course,
Percy sticks up for her
every time. 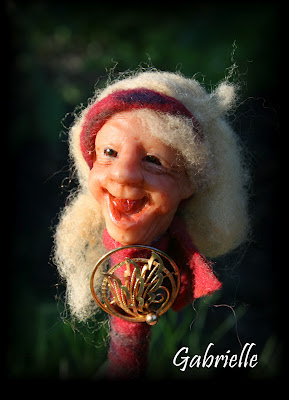 Gabrielle - Gabby  for short.
She is far more enthusiastic and optimistic
than Frieda,
but at times her monkey chatter
is equally as distracting.
Her stories, while certainly
far from glum and worrisome,
quite often go nowhere.
She's got good intentions
but occasionally she just needs to
shut up.
She doesn't do Silence.
She should.
She's likable for the most part,
but even her die-hard
friends on the Board
have been known to grumble
under their breath ...
"Gabby - will ya give it a rest." 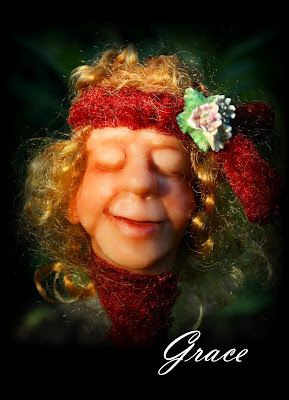 Grace resides in Gratitude.
She is extremely patient, accepting and
non-judgmental.
She is content.
She breathes slowly and deeply.
Her greatest pleasure in life is doing
nice things for people.
Often she gets overshadowed by
the volume and activity of the
rest of the Board.
They don't allow her enough
time to think,
let alone act.
She really should be more pro-active.
She has no great aspirations
to move ahead
or be anywhere or anyone
other than who she is
right now. 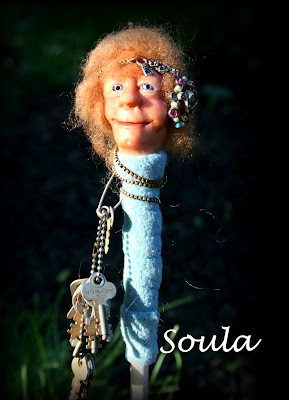 Soula is the Keeper.
The Keeper of the Keys.
The keeper of treasures,
of memories, of stories,
of secrets.
She is excellent with keeping Secrets.
In fact, her middle name is Confidentiality.
She is the Steward.
The Board values that and respects her for it,
but too often they are vying for position
with their own docket
and her role is shoved way down the agenda.
She worries that she is not going to get to
document some of the
important stuff that she has been
entrusted with.
The rest of them need to go on
hiatus and leave her
to her work,
uninterrupted. 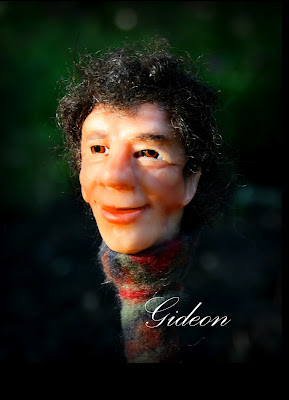 Gideon is the other male on the Board.
In contrast to the peeney gerkin, Percy,
his presence is comforting.
He is the eternal voice of wisdom.
He knows stuff.
The Board knows he knows stuff.
Gideon sits quietly for the most part,
and when he speaks, it is ever so softly.
The Board has come to learn that
they need to listen.
And act.
I've known about Gideon long before I
knew of anyone else - even Minnie.
We go way back - back to when I was
5 years old, when every night I would
kneel and say the prayer:
"Guardian Angel, my guardian dear,
to whom God's Love commits me here.
Ever this day, be at my side;
To light, to guard, to rule and guide."

Gideon is my Guardian Angel.
It's good that he doesn't have an issue 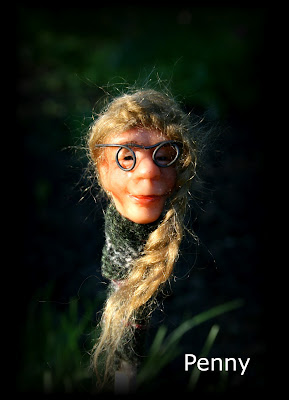 Penny is left-brained.
She is highy organized and efficient.
She actually likes numbers
and is good with them.
She can do remarkable
things with a budget.
She has had to quietly
cultivate her skill
and a thick skin
because she gets absolutely NO
respect from the Board.
They pooh-pooh her
as insignificant and
refuse to believe that
she does have those skills.
She doesn't care.
She's got enough
self-confidence to know
that none of them would be anywhere
without her. 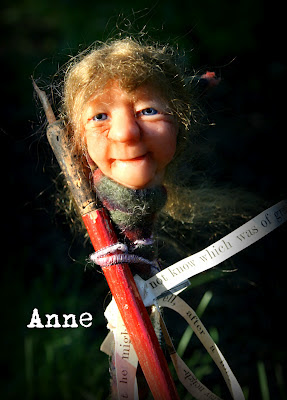 Anne with an E.
Like Anne of Green Gables -
my first novel after The Bobbsey Twins.
And Anne Morrow Lindberg -
for her Gift from the Sea.
Anne loves Words.
Individually and in groups.
She also loves a fine pen.
It is she who is responsible for
the plethora of journals.
When she attaches the pen to
her heart rather than her head,
the words flow like a river.
She works most effectively
with minimal distraction.
Unfortunately, the blather of
the Board is incessant
and she finds herself only able
to work when the rest of them
are out to lunch. 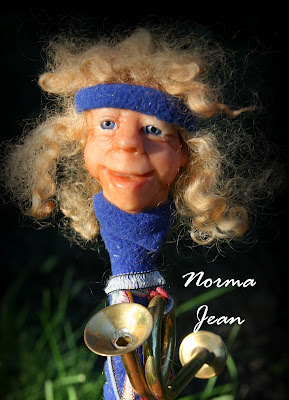 Norma Jean is the Warrior.
She's often not present at the meetings
because frankly,
she likes to choose her battles
and if she hung out with this eclectic ...
(I almost said dysfunctional, but that's
unkind ... thank you, Grace)
bunch ... she would surely be
worn out or driven to complacency.
She tries hard to pay no heed to pettiness
or drama for the sake of Drama.
But she comes out as
fierce as a Mama Bear
if it involves
children.
She has strong morals and values.
She sides with the underdog.
You might think she's sleeping
but she's not.
She'll be there when she's needed. 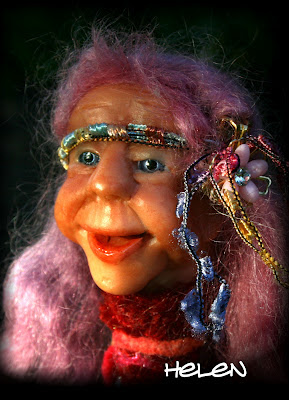 Helen is the Adventurer.
Named for Helen of Troy, and my friend
Helen of Kansas who opened
a whole world to me,
and Helen Keller who said:
"Life is an Adventure, or it's Nothing."
And indeed, Helen thinks in terms
of every single thing in life being an Adventure.
Helen does not own a GPS.
She will look at a road map because
she likes to see the Big Picture.
She knows that some of the best adventures
come from getting lost.
She's not adverse to asking directions -
you never know who you'll meet.
She loves surrounding herself with people.
She doesn't require much sleep.
Or much notice.
Do not invite her to do something
or go somewhere unless
you really want her to be there ...
because she WILL go. 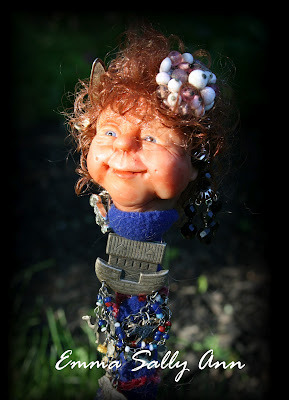 Emma Sally Ann is Much.
She is a big woman with a big heart
and big dreams.
She also is a certified Hoarder.
She actually was Chair of the Board
for years and years and years;
until it was recognized that she
in fact was functioning with a Disorder.
Hoarder Disorder.
This Board is big on Disorder.
It's believed that Emma Sally Ann was
a Crow in her last life.
She was a Recycler before
the word was invented.
She sees things in Nothing.
She makes things from Nothing.
That was all well and good for a
very long time.
She got the others right excited about it all.
Now they just think that she needs
an Intervention. 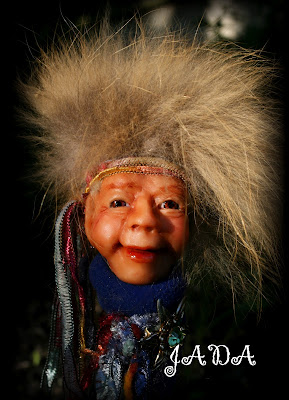 JADA is the Creative Soul.
She is named after the very, very most
ultimate creations that came from this life ...
Jaime, Ashley, Daniel and Alyssa.
She lives to create.
She sees potential in everything.
That's why Emma Sally Ann was her very
best friend for many years.
JADA is trying to distance herself as she
realizes that ESA enables her own issue
with A.D.D. - 'Artistic Disorder Disorder'.
To JADA, Creating is Being.
There is no other way to live.
Creating things, creating spaces,
creating opportunities, creating memories.
JADA loves the Old.
And JADA loves the New.
JADA is fueled by Passion.
And People. 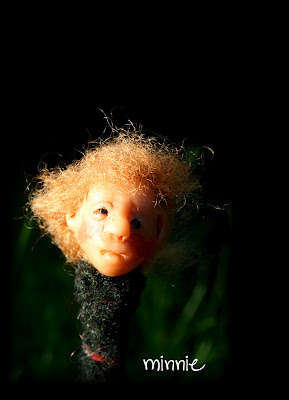 Minnie looks like a sad, pathetic little thing,
but she cannot be dismissed.
Next to Gideon, she was first on the Board.
For the longest time
she handled everything alone.
She is an introvert to the core,
but she is tenacious.
She held things together until
other characters could be recruited.
Even though she has outlived
her usefulness,
and her role is obsolete,
she has been grandfathered in.
She sometimes likes
to remind the Board of her presence,
especially in a group setting
where she's known to shush
the whole Board to the back of the room.
She has shrunk with age,
but she is still very much present. 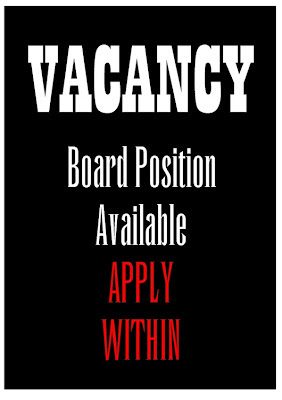 g
The last position on the Board is Vacant.
Like a well decorated house,
and a circle of friends or family -
there should always be room for one more.
Frieda also tells me that it's definitely
unlucky to leave it dangling at 13.
Helen insists that it's always wise to
leave an opening for what it to come.
Soula feels that there is definitely
another dimension to be welcomed.
Gideon says 'What will be will be.'

The Board has been reviewing applications.
The Realist keeps submitting a resume,
thinking that need is going to dictate.
The Board keeps rejecting it.
The Realist counters with:
"You NEED to get a Real Job.
You NEED to save some money.
You NEED to stop letting the monkeys run the zoo.
It's time to let ME take control of this Head Room."

The Board replies with unified conviction - the only time that they have
achieved consensus. " We have operated quite acceptably in our
own quirky way for the past half century.  Application denied."
The position remains vacant.
Posted by EvScott at 7:31 PM

Oh Ev, I LOVE it!!! It's "you" perfectly!! Thank you for sharing all of your delightful, quirky, sensible, sweet selves with the world!

I love this. I love you, and each and every one of the board members. ma uh.

In our family, we call this Board of yours the "Itty Bitty Sh**ty Committee" because they so often seem hell-bent on creating negative noise. I like how you identified a few of the gentler souls who are there trying so hard to influence the louder members and, surprisingly, manage to do so once in awhile.

I can't imagine that anyone has just one single voice in their head :)

I LOVE that, Lorna! Wish I would have had that to share at our workshop last year ;-D And yes indeed ... I DO think that I am not the only one with a whole chorus ;-)