Poor Brian. I think I might have given him a bit of a startle last night. I was working away at the stove, making supper when I glanced out of the window.  I gasped "OH MY GAWD!", threw the stuff I had in my hand, rushed in the livingroom and grabbed something and torpedoed out the door. All the while, he was saying: 'What?' ...'WHAT?' ... 'WHAT???'. I was moving so fast that it took three Whats to throw back 'The SUNSET!!!'. The thing I grabbed was my camera. 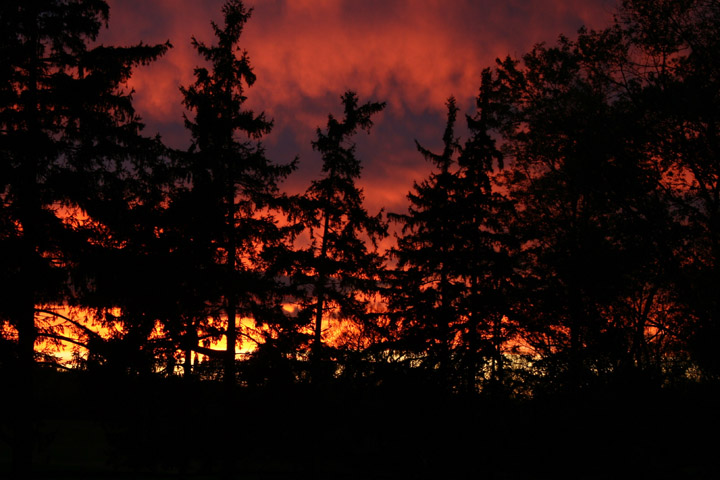 The sky was spectacular. Shockingly spectacular. It darn near made my heart stop. My frenzied response nearly made his stop. There was the brightest and most brilliant shade of pink and intense, deep blue spread over the entire west - from one side to the other, not just the usual hot spot that contains the magic. 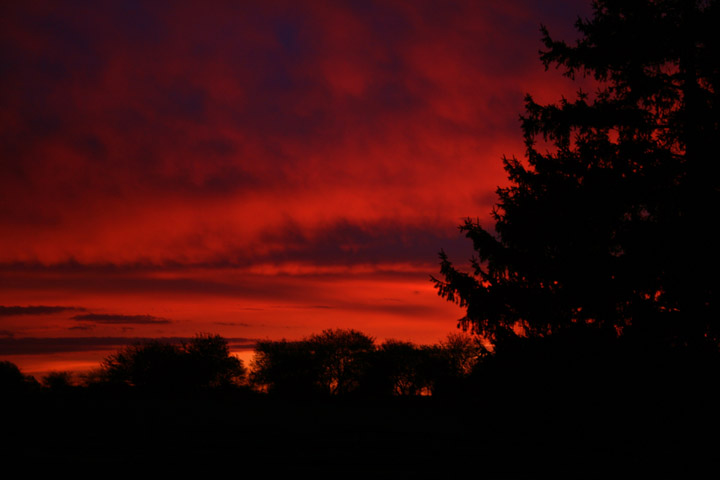 In my attempt to get closer to it, I had to climb the fence and go across the donkey field. In my slippers.  Without soles between that and my feet, I was feeling the odd pile of soft stuff.  It wasn't possible to avoid it because I could not take my eyes off of the sky for even one split second. Sunset is fleeting; slippers wash. 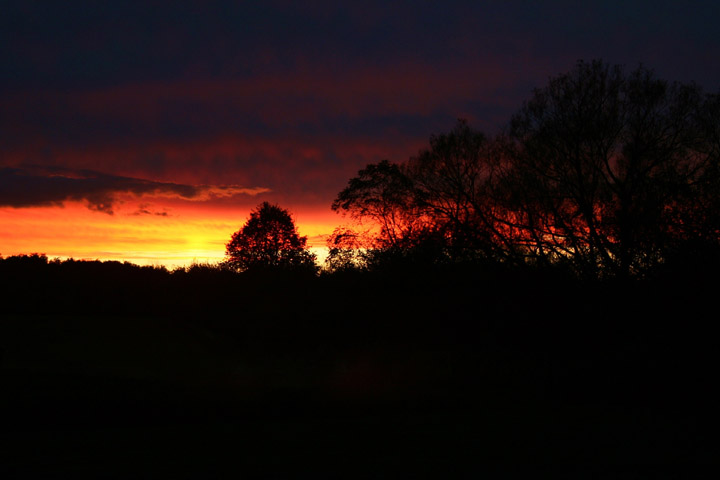 Just a couple nights ago, Brian had been witness to my Sunset Frenzy as I rushed down to the causeway in our place in Newfoundland. There's a wide open view there of the water and the hills and the evening sky.


What might have been a few minutes turned into a long excursion because a neighbour who I had never had the chance to meet,was walking along and we had a nice visit. She said 'I thought it was some tourist taking pictures.' 'Nope, not a tourist.' I replied, 'Just an appreciative local.' 'Oh maid, there's been a lot better sunsets than this.', she informed me. 'You should sees it some days.' 'Well, this one's not too shabby.' I responded, assuring her that I didn't consider it a waste of time at all. The sunset was done and the sky was basic black by the time I returned.  Poor Brian was likely thinking that I had fallen into the sea, as I've been known to climb the rocks to get a better shot, just as I climbed the fence last night.

These are just a few from the other night: 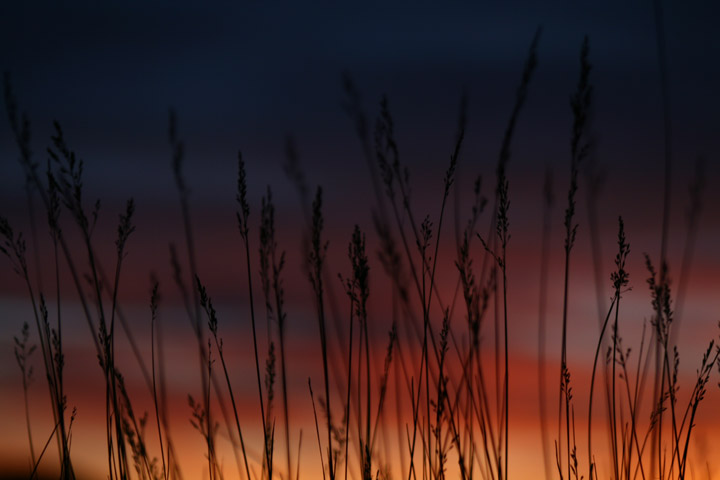 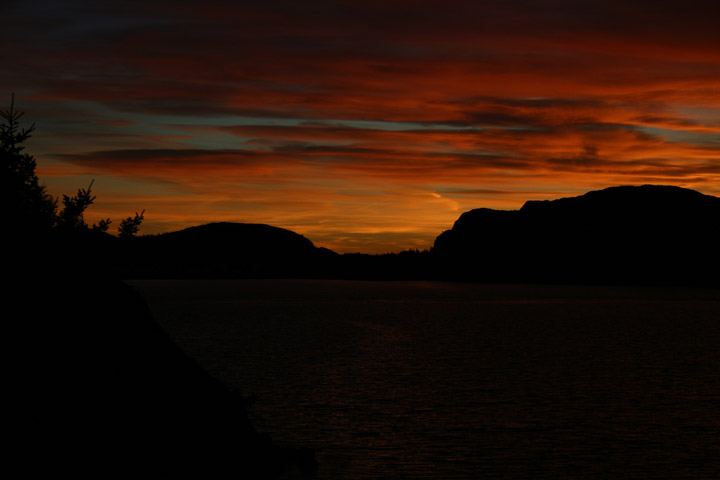 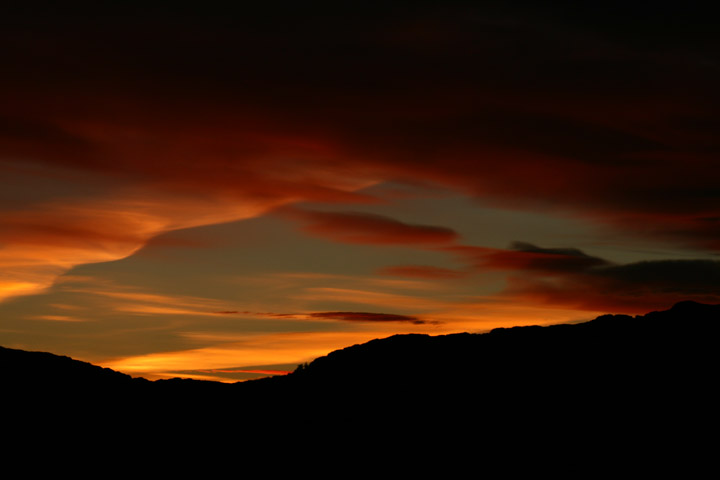 Glorious sunsets get me downright excited.  Always have. There just aren't enough of them. Any time that the sky turns into an artist's vibrant palette, I stop anything I'm doing and glue my eyes to it for the duration.


If I'm driving now, I pull over. I used to try to glimpse them as I carried on, but now I stop and savour the gift.  I remember numerous times, driving along with my kids in the car, saying to them 'Look at that sunset!  LOOK!'. They'd humour me and say 'Yeah, Mom - we see it.'  I'd insist 'No ... LOOK at it. Really SEE it!'.  They never seemed quite as impressed as I thought they should be. They'd have their heads down, doing whatever it was that they were doing and mine would be swiveling like one of those bobbing puppies that people used to have on the back window ledge. I'd be going from the road to the sky to the back to see if they were looking, then back to the sky and the road and another shot at them in a frantic attempt to make them learn to appreciate the treasure that we were being given. I've told them 'When I'm gone and you see a particularly gorgeous sunset, think of me. If I was here, I would be saying 'Oh my gawd, would you LOOK at that sunset!  Know that wherever I am, I will still be doing the same thing.' 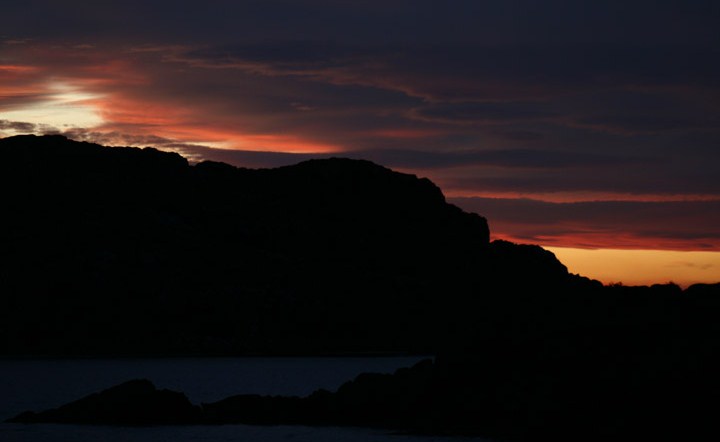 When I returned from my unexpected diversion last night and resumed frying up the wonderful cod that we brought back from the island, Brian said to me: 'There's something I'm curious about.' 'Yeah ...', I replied. 'I'm just wondering ... what exactly do you DO with all these 'oh-my-gawd-it's-wonderful' sunset pictures?'. I looked at him incredulously. 'What do you MEAN... what do I DO with them?' 'Oh, I was just curious ... do you DO something with them?  Like, are you making a book? Or are you putting them on that thing you write on? '(meaning THIS thing). 'No, not necessarily.', I answered. 'I just capture them so I can revisit them another day; but I suppose I could put them on that thing.' 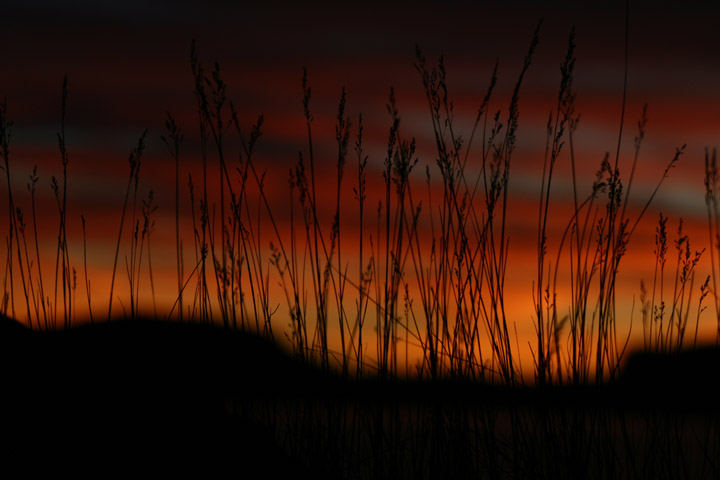 I thought it was pretty spectacular myself too! I was driving home from getting groceries and tried my hardest to convince my 10 year old how amazing it was. She just thought it was a'sunset' , a plain old sunset..kids!!=)

WOW! You just have a knack for taking absolutely amazing pictures. Maybe a book isn't such a bad idea! Spectacular!!

There's never 2 alike and I don't know many things in nature that are as awesome and as beautiful. You have a gift for capturing that awesome beauty...thank you for sharing with all of us!!

Thanks gals... nice to share it with other people who appreciate such an incredible gift ;-)

I am sure this post has touched all the internet visitors, its really really nice paragraph on building up new
website.

Hello my loved one! I want to say that this post is amazing, nice written and come with almost all significant infos.
I would like to look more posts like this .

Paragraph writing is also a excitement, if yyou be familiar wth after that you
can write iif not it is complex to write.

Loook into my homepage; data warehousing

It prevents the formation of acne breakouts that disturb teens, adults and
haunts them when it leaves. This is where the scars are
visible enough, a removal acne cures of even the deepest
scar by removing the surface skin cells. With laser therapy is not the only thing which I could use any vitamin E but I always use Myra E.
Acne inflammation can be prevented or moderated, the more carotenoids
they contain.

Professional landscapers have trained about the basic principles of gardening, and others may take short courses for
this. The strategy came to me from a backyard task magazine, in which
architecture of basic elevated strawberry and herb gardens was introduced.

Having a strong background in construction and horticulture
allow these spaces to become a reality.