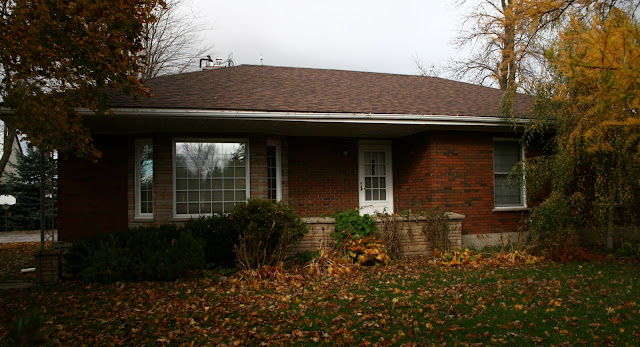 I was 5 when my parents built a new house in the apple orchard across from the old farm house where we lived. I remember gingerly walking across the thick wooden plank to look down into the wet hole of the foundation. I still have the smell the fragrance of the dank mud and the new wood. I have the vision of our very first night – everything stark and overly bright. I have the echoes of blank walls and bare hardwood floors. That stuff that makes it homey and absorbs the sounds had not yet been accumulated. I have happy times, sad times, pets and people all centered around that little corner of the world. 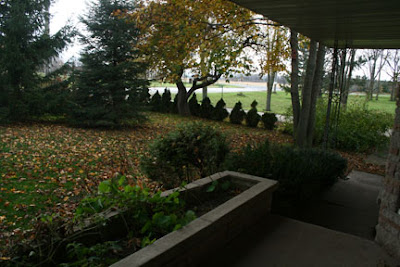 That house conjures up a thousand memories, many of them centering around the apple trees that surrounded it. Perching up in them, confident that I was in my own world where no one could see me, but I could see them. The smell of the apples baking on my Dad’s dirty old woodstove in the garage – so delighted that we were to be able to ‘cook’ something ourselves. Playing for hours on end under one old tree where the swing and sandbox lived. Trying to duck under the branches when Trigger the pony would decide that he was taking a short cut to the barn.  Watching my own children conquer the same trees that I climbed as a child. 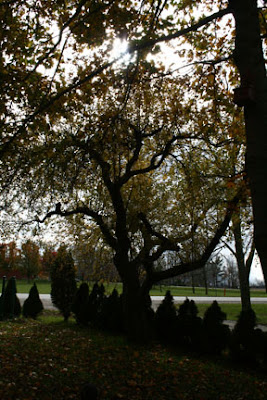 One of my most vivid childhood memories is . Since we lived in the for a good part of the year, I was well acquainted with JFK. I had collected campaign buttons and wore them with great pride. I cheered for him to become President because he had children and because I figured he had to be related to Jim Kennedy – an ancient rubby-dub Irishman who worked for us.


It was the last recess and I was sitting at the old piano at the front of the classroom, trying to eavesdrop because it was unheard of for a visitor to come to the school in the middle of the day. I heard the word 'President' and 'assassinated' and was excited because I figured it must mean that he got a promotion, that there must be something bigger than President.  When the teacher told us that assassinated meant 'dead', I just didn’t believe her. She was wrong. When my Dad picked us up at school, I told him what she had said and he confirmed, with uncharacteristic solemness, that it indeed was true. Him, I believed. I can see the day, feel the day – typical November – gray, cold and early darkness; it too was solemn. When we entered the driveway, the hired men were all out under the apple tree, filling bags of fallen apples for the horses. I wondered why they were doing a happy thing on such a sad day – didn’t they know. Shouldn't everything stop. That is the image that comes to my mind with thoughts of that day – men with big burlap bags stooping under the apple tree. 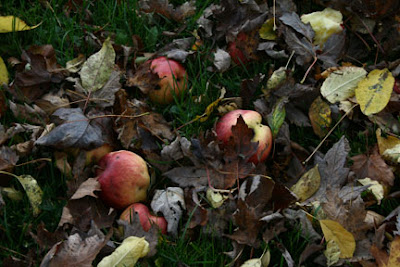 Snow apples, Russets, Spies, Crab apples, ones I didn’t know the name – but my favourite were the Delicious. I would run out after school and scour the long grass and fallen leaves for one with the least worm holes. Organic apples they were, all the way.  With eating around the worms, the scars and the bruises, it would often take four or five apples to equal one. In the spring Bud and I used the tiny little green ones as ammunition in ridiculously dangerous attacks on each other. I'd use them as heads for stick people, long before I knew of the existence of apple head dolls. I'd fill my pockets with them and coax the foals to become my friend. 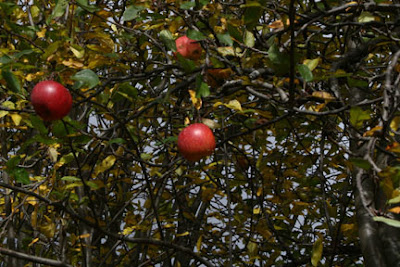 Apple pies and apple sauce … I see my Mom in her apron, standing at the sink with piles and piles of apples. When I helped her peel them, each one would be a personal challenge to get the peel off in one strip without it breaking. Success was sweet because it was so rare.


The very first time that I visited Mom's grave, I did not take flowers – I took apples from our yard and laid by the headstone and mourned the loss of my mother and life as I knew it. 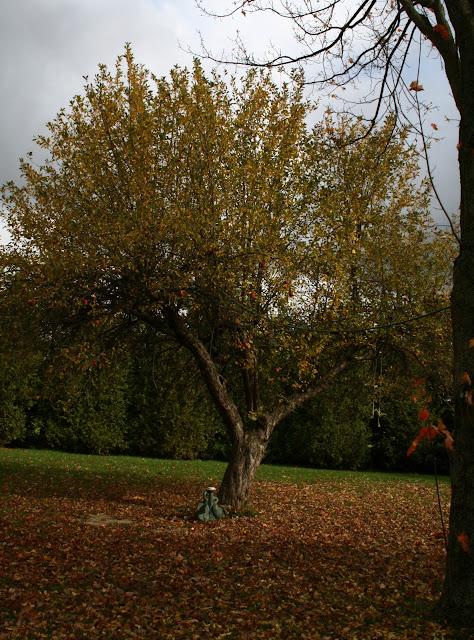 The day came in 1990 that we had to sell our childhood home. It took my sister and I months and months to tackle it. It was no longer stark and bare; it was filled with the accumulation of 31 years of living. It held not only the memories, but also the last physical remnants of the lives of so many we loved: our father, our mother, our sisters and brothers and grandparents. All gone, but with bits and pieces of them left there - us the reluctant stewards, needing to make decisions of what to keep and what to let go.  We would go in to the house, make a cup of tea and sit there trying to figure out where to start. Then we would both say, ‘I can’t do this today.’, and spend the time talking instead.  It took us a full eight and a half months to deal with it – almost like the gestation of a child.
We offered it for sale privately so that we were in full control. One fellow said, ‘Nice house, first thing I’ll do is clear out all these old apple trees.’ ‘Then you won’t have it.’ we bluntly informed him and walked away with him still standing there in the driveway.  The wonderful young couple who ended up with it, won our hearts because they answered the first question properly: ‘What about the apple trees?’  ‘We LOVE them!’, they replied and their enthusiasm and sincerity endeared them to us forever. 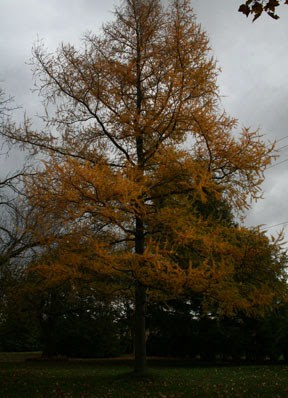 Their love and care was evident from the beginning and there was great comfort in that. But still, in spite of how happy I was that they had it, and how they welcomed and encouraged us to come back any time, I could not do it.  Seven years it took me to enter that house again. It was changed enough inside that it didn’t make me sad, but as I left, I automatically turned to see what time it was. There was a picture where the clock should have been and the reality of life and loss and change was like an electric shock.
I went back today, for what I know will be the very last time ever. After 21 years, our lovely couple has moved and this is their final weekend. It is one more step away from my memories, my childhood and my childhood home. There will be no connection with whoever moves into it now. They won't know us, won't know our attachment; there is no need to go back. 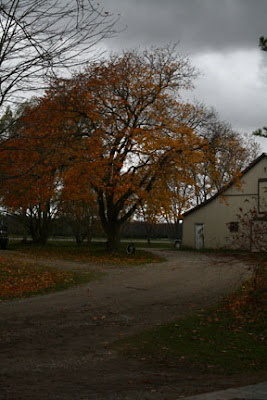 There was no one there today when I stopped by to walk about and reminisce. I was glad - I wanted to be with my own thoughts.


The circle drive which was so huge when I rode my tricycle around it, has shrunk. The immense old maple tree that I thought was the most gigantic and splendid tree in the world, apparently has shrunk as well over the years.  It turned into just an ordinary tree. 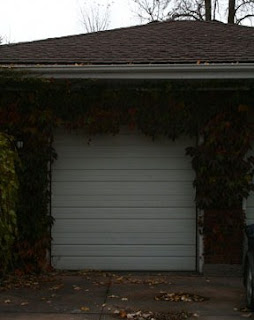 The garage door where my Mother would bounce off one side or the other, then stick the chrome back on with bandaids, is still narrow.  A fifties garage was not meant for a big boat sixties car.  An inch and a half clearance on each side took a special skill that apparently none of us in our family ever mastered.  The vehicles bore the proof of that. 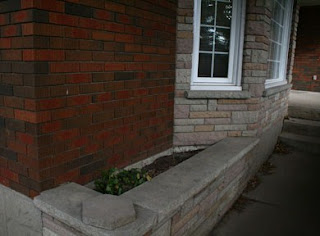 I sat by the planter where ‘Pete the Budgie’ was buried after a full military funeral – army men and canons surrounding his tiny tin casket. It’s likely still down there, we planted him so deeply.  I gazed into the window that my mother’s face is forever etched into – peering out when we drove in the driveway. ‘The kids are home.’, she’d say. "WHEN do we stop being the KIDS?",  I’d tease her, being the mother of two myself at that point. "Never. You’ll ALWAYS be The Kids", she’d firmly respond. But she was wrong. Before we knew it, before we were ready, we were nobody's kids anymore. 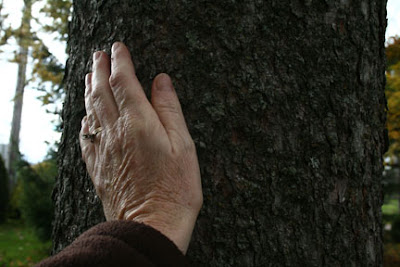 I wandered around the yard that had nurtured my dreams and imagination. I gazed up to the tops of the trees that were eye level when they were planted. I laid my hands on the same trunk that my parents had touched. I gathered up a bag of imperfect apples for the donkeys, thinking about that gray November day. And I scoured the ground under the Delicious tree for one that had the fewest worm holes and bruises and ate around them. 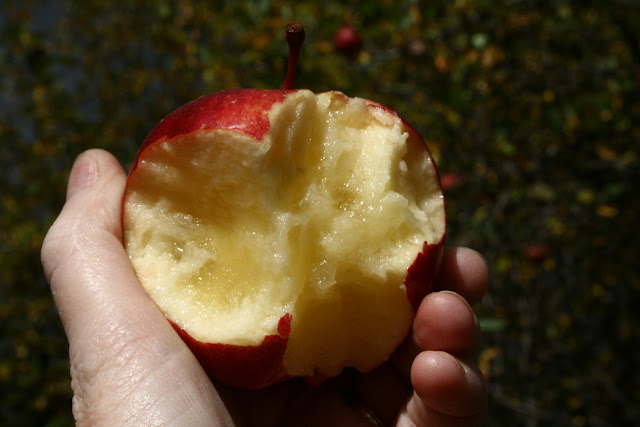 My sister just lives a mile down the road, so I stopped over there for a cup of tea and a chat. She wasn’t home, so I left the most perfect apple I could find on her doorstep.
The final apple.
Posted by EvScott at 8:58 AM

Great read Evelyn!!! Such a sweet and heart warming/heart breaking story. You sure know how to use the right words to "capture the feeling" of the story, much the way you do with your camera and the feeling of your photographs.

Thank you for your sweet comment, Leci ... I just attach the pen to my heart and out it comes. I do love Words and Pictures ;-)

Ev you are such an inspiration! I love the way you speak with words that paint pictures down to the smallest details. I am totally envious! You find beauty in everything and everyone and I am so glad that you share it with us. Makes me appreciate and notice the small things in life too! Although, I've never felt like crying at a picture of an apple before... that was pretty close. Thanks for making me smile:)
xxoo Rebecca

Rebecca - what an absolutely lovely thing to say. You really made my day ... THANK YOU :-) Life is all about the little things, isn't it? A zillion wonderful little things.

Awwww ,just catching up on some reading here...and not so sure I should have read that!!!
Touching ...and poignant, sweet and as always ,thoughtful of you to leave your sister the best apple!
Who says those new owners wont be nice and let you drop in???We do!
xoxox

It was bought by the people beside it and apparently will be renters - so that's a bit different scenario -they'd be saying 'Exactly WHO are you and why should I care????'

Touching. Your blog is such a gift of our history. j