Coal Black was Pink not Blue 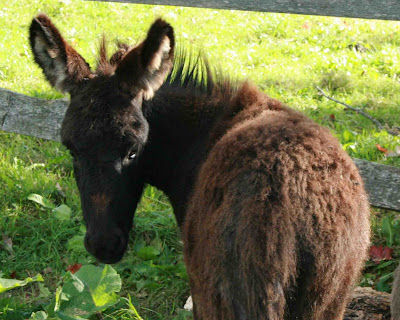 Back on June 12th, I announced the birth of my Coal Black Jack, who I named Cole. He's been a very demure little fellow compared to Wild Man Pete - quite shy & reserved and very petite. Where Pete runs around like a mad man, jumps on things like a goat and generally makes his presence known, wee Cole quietly minds his own business.

He was so timid that he refused to cross the brook that runs through the pasture. Everyone else stayed on that side all day - actually for days at a time, but he never would across. 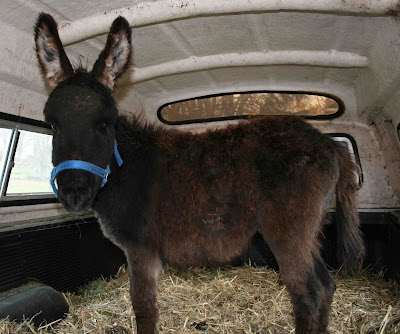 Often, when I'd see him by himself, I'd feel badly that he was lonely & missing his Mom & his donkey friends, so I'd slip over to visit him. Any time I did that, the whole herd would look up & say to each other 'Hey - that woman might have treats, we'd better get over there.' And they'd all rush over & push wee Cole out of the way. But the mission would have been accomplished anyway - he'd have company.
A couple weeks ago when I tried to have a sneak visit with him, no one noticed and it was just the two of us. That's when I noticed that when he relieved himself, the water was coming from a different spot than it should have been. On closer inspection, yes indeedy, Cole was not a Jack at all. Cole was Colette. And it was perfectly fitting that he is demure & dainty - he's a lady.
Some folks connected in regard to a posting I had about having a little Jack for sale. It turned out that they really did prefer a little long-earred girl & I just happened to have one. A couple weeks earlier, that would not have been the case. We knew that it was the right match when it turned out that she had been born on their Anniversary, transferring the tradition of 'Special Days' to her new family. Today, our sweet little Jack-that-turned-into-a-Jenny left for her new home where I know she will be treasured & loved and will live happily ever after, befitting of the little Princess she is. 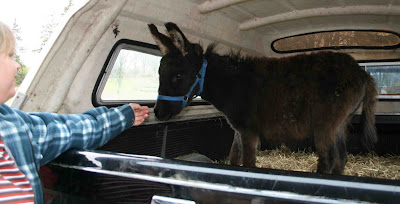