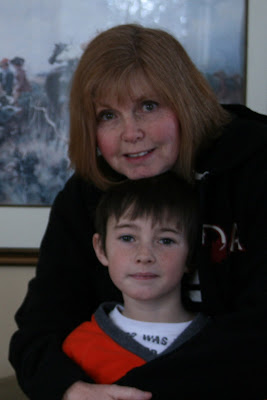 This weekend, I got to spend time with my favourite nine year old boy, and favourite six year old girl ‘in the whole wide world’. They know that's who they are to me. When they were younger, they would announce themselves at the door: “, your Angels are here.”  Once, when I made the mistake of saying ‘Here’s my kids!’, I was immediately corrected with: ‘We are NOT your KIDS –we’re your ANGELS.’ They still are, but as they get older, I more often greet them with “There’s my favourite ___ year old in the whole wide world!”
What a delight it is to spend time with them.  It always has been, but as they’ve grown it’s been even more interesting to talk to them and learn what’s going on those pretty little heads.
They are so worldly. And they love to talk. I love to listen. We have quite the conversations and their wisdom and insight often surprises me.  They know all kinds of things that I didn’t and my own kids didn’t at that age. By six, Scotty was a proficient and avid chess player. At nine he has designed his own webpage.
I’m always quizzing them on what they know. The other night, the sunset was beautiful, and as is my habit, I was raving about it on our drive home. I said to my wise grandson: “Isn’t that something?!  Do you know what direction the sun sets in?”  “Well, yes.” he replied, in a tone that suggested that it was insulting to even him ask him such an elementary question. “Good for you!” I congratulated. I think I was about 27 when I could remember that, and I had to tie it to an association like 'Go West Young Man'. “What direction is it?” I queried.  “THAT one.” he answered, pretty certain that his elderly grandmother is starting to lose her mind and didn't even know which direction I was looking.

Yesterday, when we were driving along there was an elderly gentleman having car trouble. I drove past, but turned around to see if he needed assistance. I wound up driving him to his home town. When we dropped him off, he offered me money, which of course, I wouldn’t accept. Then he offered it ‘for the kiddies’.  ‘Thank you, that’s sweet – but no.” I insisted.  When we drove away, Scotty said: “I saw that! He was going to give us twenty bucks!! Why did you take it?!” “Because you don’t take money for a kindness,” I explained to him, “that’s what makes it a kindness.”  “You are a very-kind-woman.” my sweet six year old granddaughter said with such maturity that it took me aback. “I like to be kind.” I said. “Yes, I know that about you.” she answered very seriously.  “They could use you at my school. You should come there.” “Why’s that?” I asked. “Do you mean they’re not kind?” “No.” she said matter-of-factly. ”They don’t DO kindness. They’re….”, she hesitated, thinking about the right word.”…. rough.” She thought for a moment then clarified: “They’re only kind if you’re bleeding.”

I wish sometimes that the world would stop and listen to six year olds. Listen to what they’re seeing, they’re learning, they’re thinking.  We are often so tied up thinking that it’s our job to teach them, to fill them with information that we often don't take the time to hear it back. To see what they are observing with their eyes. They're always watching and processing, even when we think they aren't.
They have as many lessons to teach us, as we have for them. Maybe more.
Posted by EvScott at 12:58 PM

First, what a gorgeous boy you have in your arms there!

Second, I couldn't agree more. I was just telling Ted yesterday,"If you want to know what kind of person you are, just listen to your kids!" because all I hear are my own words coming from their mouths!

By the way, did you know that NORMA is back? I just noticed she's selling her Santas again on Ebay!

Oh yes ... for sure, Jill - our kids aren't shy about sharing what they really think, are they:-) lol

I don't think Norma is back, is she? Last I heard, she was able to list things from down there, which is absolutely wonderful! I'm so happy for her - and for all her collectors.
Ev

what a handsome angel you have. Yes, out of the mouths of babes. I have learned a thing or two from some much younger then me. A view from their innocent eyes can speak volumes some days.
Pea

That is surely the truth, Pea ... their perspective is often unobstructed - don't you just love them!

"I wish sometimes that the world would stop and listen to six year olds." Thank you for this... I got all teary eyed when I read it. The older we (okay I) get, the more precious words become. Kids can't possibly know what their words mean to an older person, nor should they. My grandkids surprise, amaze, and delight me every day with their take on the world. I only hope I can live up to their expectations - they don't need to live up to mine. Thanks for sharing this personal story.