Many years ago I heard a strategy that I thought sounded like a good idea at the time.  If there was something in your life that was bothering you, or your mission was to get a new one, you were to totally rid yourself of the old one and then you’d be forced to do something about it rather than just settling. Made sense. 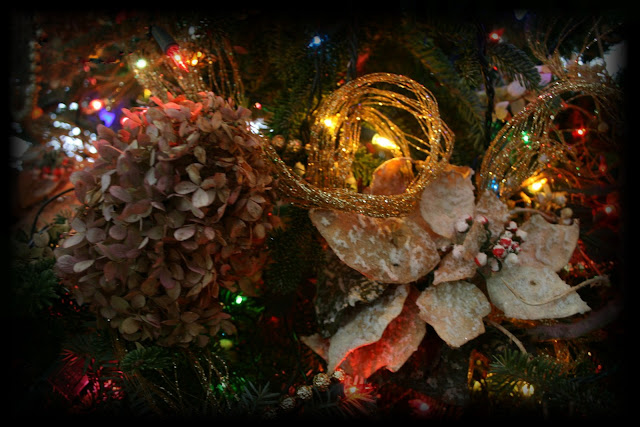 For at least eight years, the tree that I use in the livingroom has been long past its due date. It was over 20 years old and had become so sparse that I had to bend the branches on one side towards the front, then stuff garland into the holes and fill it in with a couple dozen branches from another defunct tree. It was basically only a half of tree, and not a good one at that.
Year after year I promised myself that next year I would have a new one. They go dirt cheap at the auctions in the summer – beautiful, good quality artificial trees for just a few bucks.  The problem is, the only time that it ever crosses my mind is when I drag it out each Christmas. I refuse to pay the two or three hundred dollars that it costs for a nice tree during peak time, so year after year I say to myself ‘This will be the LAST year I have to do this.  NEXT year I will get a new tree.’
Well, here we are - the season is upon us and once again I am needing to resurect my pathetic sad old tree.  Grumbling at my incompetence, I went to the basement to drag it up yet one more time. 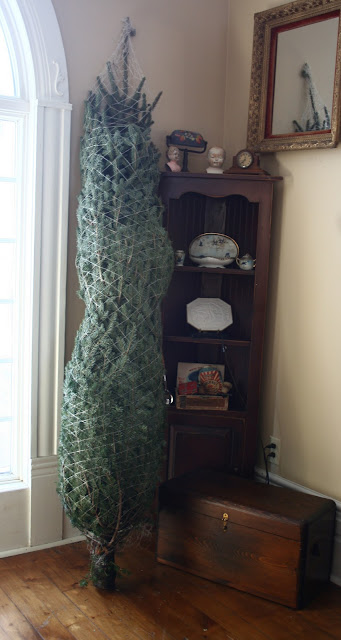 But I couldn’t find it. I searched every room numerous times. And then it hit me. I had instituted the old ‘rid yourself of it’ tactic.  It came back to me that after Christmas I had Brian take it to the dump so I would never be tempted to get one more year out of it.
All fine and dandy if it would have August that I remembered this brilliant move. I even begrudge half price that they are now when I know they practically give them away in the summer.
The other day, out of the blue, the nostalgic fragrance of evergreen came upon me and brought back memories of Christmas past.  Ah-hah! I thought. I can get a Real Tree!!  That will be a wonderful treat. It’s been quite a number of years since we've had one. When the kids were here, we always had a real tree as well as the phoney one. That was important to us. It came from the time that Jaime, at four said 'When do we get to put the tree together?' What self-respecting country folk lets their child believe that one "puts a tree together". From that day on, there was a live Christmas tree in this house. But when they all left, it became a mess and fuss that I determined that I could live without.
I mentioned my idea of a real tree to Brian and immediately he was on a mission. He's a fan of Real things. He borrowed a truck, which cost him twenty bucks in gas; the tree was forty and another ten for sand. Seventy bucks. That would have gone a fair way towards the decent artificial one that I'd have for next year too. Oh well.  A beautiful, full, fresh, gorgeous big tree would be such a treat. And Christmas Tree Smell. Mmmmmmmmmmmm.
Back in the day, we would have great fun picking a tree - it was an event. This time, Brian brought one home in a net. Never got a tree in a bag before; actually never let Brian out on his own to pick out a tree on his own either. Times change. I have become a lot less fussy about a lot things.  I could release control enough to let him choose all on his own. 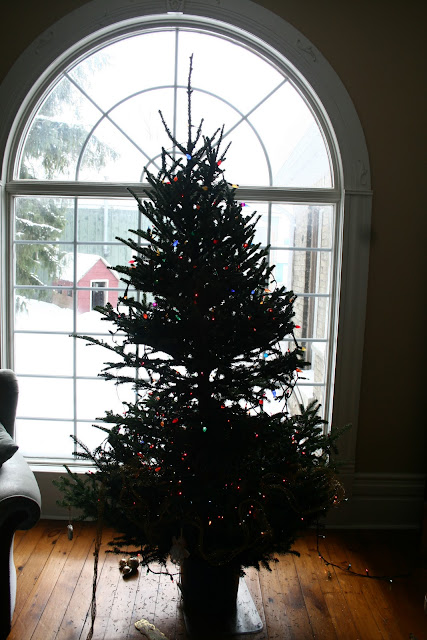 So I open the tree. It’s a little on the puny side compared to the image I was courting. I wait for the branches to fall. I wait. And wait. Thinking that they’ve just been traumatized, I wait til morning, at which time I must face reality. The middle of my tree seems to be missing. Turning it doesn’t help. Hmmm…looks suspiciously similar to the one that went to the dump except that I can’t bend the branches toward the front. And it doesn’t smell.  At all. Really ... AT ALL.
What to do? Back to the basement. Why I kept the bag of ‘fill in’ branches but threw the tree out, I don’t know, but I was glad I did.  They didn’t snuggle in like they did in my phoney tree, but it filled sufficiently to block some of the light and support the goods.
I stuffed it with gold net garland and reams of beads, then added my favourite antiqued white iced pointsettias and dried hydrangea. I used every strand of coloured lights I could get my hands on, being forced to mix styles to get the coverage.  I topped it off with some collected treasures, like the paper angel that Daniel made in kindergarten a quarter century ago. 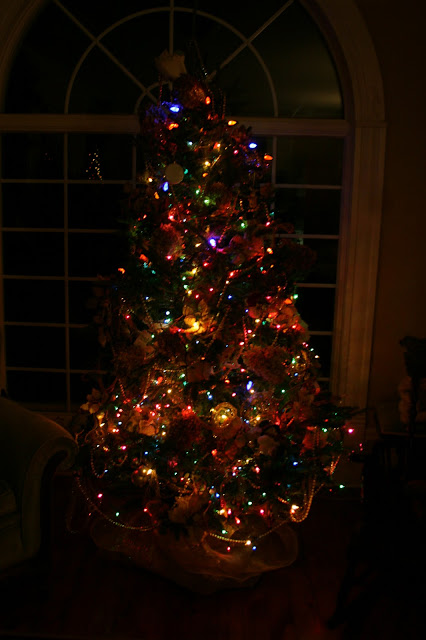 Holes, phoney branches, and lack of fragrance notwithstanding, it’s done;  it’s fine and I’ve learned a few lessons along the way.
#1) Sure … rid yourself of the old but you need to remember that you did that.
#2) Even the Real Thing can have major holes.
#3) Don’t buy a tree in a hair net.
#4) If you have enough stuff to load something down, and can turn the lights out and squint, anything looks fine.
#5) There's always next year.
Posted by EvScott at 7:37 PM

Oh Ev! I don't know if you were going for sympathy or humor, but you get both!

You tell a great story!

Saw your newest creations on Ebay - scrumptious as always.

Come visit me! I just told created my own version of Scrooge - Clay and Needle-felted style!

ps Your mom's been on my mind lately and the story you shared with me about her Christmases past. It makes me appreciate what I have all the more.

Hey Jill ... thank you for connecting. I did pop over for a visit and oh my! What an ambitious undertaking - it's awesome! An 'illustrated story' no less!

That's so nice that my mother was in your thoughts ... thank you for sharing that. It's not an easy time of year for many people.

Wishing you and yours a very lovely Christmas...
Ev ;-)