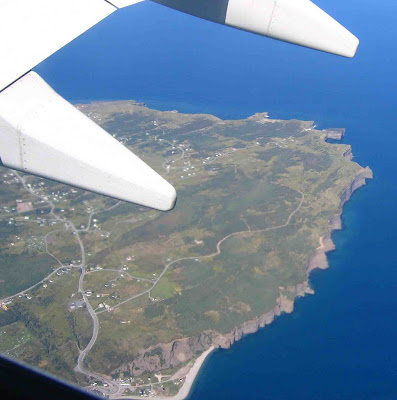 It was Friday that we headed home from Newfoundland. Friday, September 11th. Of course, my thoughts, regardless of where I was, would have been on that tragic day eight years ago. But being in the Gander Airport, it was especially sobering. I envisioned that building bulging with people, and as I flew away, I thought of all the planes that would have been circling & landing in confusion and fear. Such chaos & panic that so many people would have been experiencing in that very spot on that day. Quite different from the rest of us who were watching it transpire. We were watching - they were doing. I wondered how the staff could even begin to handle it - quiet & ordinary one minute, frantic the next - so much emotion contained in that small space. On Friday, with not a single plane in sight, it was difficult to picture what it would have been like that day, when the population of the town doubled in a matter of hours.
There was no hoopla on Friday when I was there. I've actually been surprised over the years that there isn't some kind of public memorial in a predominant spot in the airport, recognizing the part that Gander & the area played on that historic day. Their efficient response & hospitality became legendary - the rest of Canada was certainly proud. I asked someone once why there was all kinds of other history on display there, but not that day. They answered 'Well, I suppose it's because we don't think we actually did anything other than what needed to be done - we don't have to brag about that.'
Very 'Newfoundlandish' in their humility & actually quite refreshing that they don't feel the need to re-live it or put attention on themselves. But for me, it was certainly significant to be in that place, on that date - remembering what was lost and being grateful for what we have.
Posted by EvScott at 7:18 PM

It was a day I will never forget. Thanks for sharing your thoughts Ev.

The paleo casserole Diet is the smart thing to do.

Arrowroot flour is a wheat flour alternative recipes pancakes made
with almond flour and combine well.

Also visit my blog what is paleo

Moreover microsites are linked to the main site's. This will cross-ventilate the entire space and safely flush out all of the relationships in their lives. Although you will be able to provide you with associated keywords around the particular keyword you have entered.