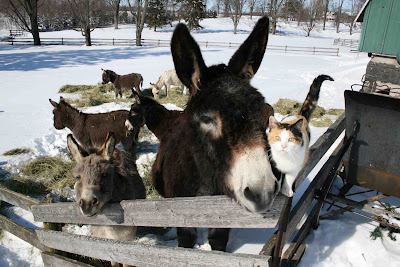 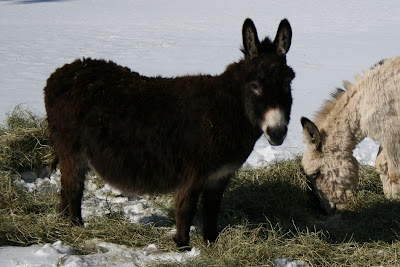 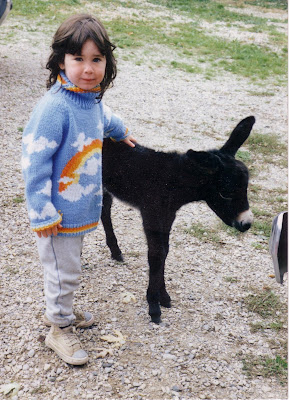 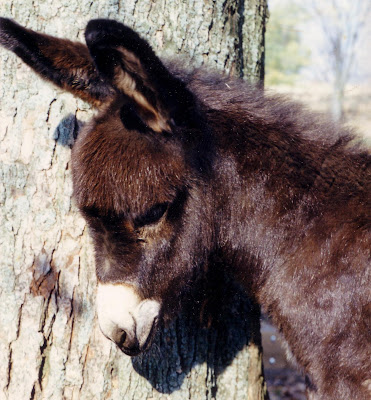 ******************************************** In 1981, we got our first miniature donkey. He was like a dog - following us everywhere- even into the house. I was smitten with this gentle, loving long earred friend. When someone wanted to buy him as a husband for his jennet, I said "There isn't enough money in the world for me to sell Donkey Otie." So instead, he sold us his 'Molly'.
On September 26th, 1983, Otie had a terrible accident and died. I was heart broken and could not bear to even look at Molly. I took her to my Dad's barn and swore that I could never invest that much love in any animal again. We didn't know that Donkey Otie had left us a gift. In June, Molly gave birth to a beautiful jennet - 'Annie'. I was probably more excited that day than when my own children were born. I was beyond in love with this little Disney creature with the shaggy bangs and the big eyes. In June we got another little jack - 'Nugget' - who would be our herd sire - we were Donkey Farmers.
Nugget was the same age as Annie & liked her a lot. He didn't care for old Molly - he thought that she was old and overweight & perhaps he thought that the daughter would have issues if he had a relationship with her mother. At any rate, while Molly followed him around, begging him to make her a mother again, he would just ignore her. He did do his job once or twice, but it was real work on her part to get him to oblige.
We bought a farm in 1988, simply because our critter menagerie was expanding. The first thing we did was adopt two LARGE donkeys - 'Ransom & Erin' - more than twice the size of rest of the team.
The next spring, one morning I went out to find a gorgeous chocolate coloured donkey with the most beautiful eyes. I stopped in my store to share the news with my partner & some customers overheard my excitement. They followed me out to the farm to see, what I had described as the most sweet, adorable creation in the entire world. Sure enough they agreed and said that they wanted him. The reality of donkey farming is that you can only have one jack in the herd. I had not had a single female baby since the arrival of Annie, six years earlier. I agreed that these people could adopt him and home they went, to design and build a barn to house this sweet little jack.
About a week later, when I was playing with him, I noticed that him was a HER. I called the folks and apologized profusely, telling them that there was no way that I could give up my little girl, I had waited so long to get to keep one myself. She was a gift - I thought of 'The Gift of the Magi' and name her Maggi.
As Maggi grew, she got a little bigger than any of Nuggets babies and we noticed a striking resemblance to Ransom. It became quite apparent that Molly had been tired of being rejected by Nugget and had an affair with the new guy on the block.
Almost twenty years have passed. We have had the joy of having babies each spring - dozens of beautiful, wonderful, long earred friends that have filled our lives with pleasure and love. There is nothing that compares to snuggling those soft, sweet babies - the velvet ears, the doeful eyes. It is pure joy to watch their antics as they run and jump and play.
On April 11th last year, our dear sweet Nugget died unexpectedly. It was so hard to lose such a loyal and good friend. He had two babies born after his passing - Victoria's baby was born early and only survived a few days; Samantha had a little girl that I named 'Lannie'. Annie was our very first baby and she would be our Last. Our donkey farming days had come to an end. Spring would no longer bring new life. Life on our farm has changed so much - our own children are grown and gone, our animals are all geriatric, aging along with us. It's hard sometimes, not to grieve for what is lost when it has been such a rich and fulfilling time in life.
Donkey jennets have big 'barrels' from having babies, and look pretty fat at any time with their 'hay bellies'. Well, guess what. Maggie has more than hay in hers. Nugget left her with a surprise gift, just like Donkey Otie did with her mother, twenty five years ago. Just like Maggie was a gift to me.
As spring comes, we will once again get to experience the miracle of birth. We have one more welcome and unexpected chance to have a little piece of our Nugget. Any day now, I will get to wrap my arms around a soft & cuddly, big eyed, long earred darling.
And in May, I get to hold another sweet wee babe in my arms and gaze into the eyes of yet another miracle - my grandchild.
Posted by EvScott at 4:57 AM