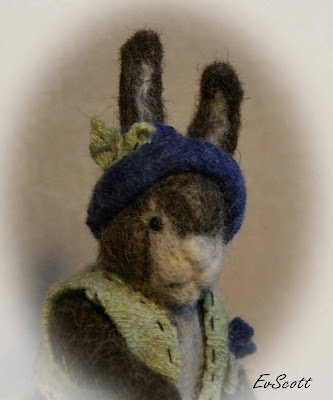 There are three things that I particularily love to needle felt - donkeys, of course - sheep and rabbits. I LOVE rabbits. I miss our rabbits. For 17 years, I could sit in my chair & watch rabbits playing everywhere. I loved it when the little 'Tim Bits' as we called them, would come out from under the porch. It was interesting how each group of rabbits had their own domain & would rarely stray from it. There were porch rabbits, playhouse rabbits, haymow rabbits, pool rabbits, back shed rabbits, field rabbits. The ones closest to the house had names - 'Brown Rabbit', 'Dirty White Rabbit', 'Black Rabbit with White Spots'. They'd be right up with the chickens & turkey & goats & cats & dog, when the treats came out.

My Dad used to have white rabbits loose on our farm - he said that he found it peaceful to see them hopping around. Brian thought that was cool, so when we got our farm, he went to the small animal auction and got two rabbits. Before we knew it, there were rabbits everywhere. HUNDREDS of rabbits. As if our rabbits weren't prolific enough, we became the Rabbit Sanctuary - a place for everyone from the city who had bought their child a cute little bunny then regretted it, to bring them and set them free.

I enjoyed them too. I didn't even care that I couldn't have flowers or a garden because they ate everything in sight. I figured that I got just as much pleasure watching the antics of the rabbits & I could see them in the winter as well, when the flowers weren't there anyway. Living, breathing creatures were always a higher priority than landscaping.

The demise of my love affair with our free range rabbbits, came about because of their irritating habit of digging small holes all over the lawn. They weren't deep holes - about three inches, just enough to twist your ankle when you inadvertently stepped into on. It got increasingly difficult to avoid them. I nattered and grumbled to Brian about it constantly, worried that the kids were going to break a leg when they were tearing around the yard.

As the rabbit population grew & so did my irritation. Those little suckers would stand right in front of me & dig, dig, dig - then they'd move on two feet & dig, dig, dig again. No reason - they weren't looking for something, they weren't burying something, they weren't making a burrow - they were just doing it to irritate me. When the grumbling & growling became too much, Brian would get a wheelbarrow & fill the holes. But he was no match for the rabbits & soon the place looked like mini bombs had gone off everywhere - the rabbits were winning the war. In '99, when we had our daughter's wedding reception here at the farm, it took an entire dumptruck of soil to fill all the holes - truly. The rabbits took that as a challenge & got right back to putting the holes where wanted them.

One day, in 2000, totally fed up with the rabbits and Brian ignoring my concerns, I developed my own strategy. I borrowed those little flourescent flags that construction people mark underground lines with, and I planted one in each hole until the flags ran out - 167 of them - it was a colourful sight. I typed up a letter for Brian, making up an address and official letter head of the DEPARTMENT OF HEALTH AND SAFETY, saying that, as a milenium project, they were doing random safety inspections. They pointed out a couple safety concerns, including the 'numerous holes of varying depths, throughout the premises'. They gave him 48 hours to fill them, at which time they would be returning for an inspection. When Brian found the letter in his shop when he returned, he took it totally seriously. Unfortunately, the timing was terrible. That evening it was a fundraising spaghetti dinner at our children's school. When he declared that he couldn't go because he had to stay home and fill holes because he only had 48 hours, I had to confess to being the author of the letter. I won't repeat his reponse:) He went to the dinner, the holes never did get filled and the flags stayed there for weeks, keeping the neighbours talking about what exactly we could be doing on our lawn - perhaps putting in a mni golf course.

I used to walk around and count a couple hundred rabbits in view at any given time and I'd be grumbling that we had Too Many Rabbits and Brian would be declaring that it was the most successful venture that he'd ever undertaken. One day we noticed that our rabbit population was starting to dwindle - which actually was a relief to me - thirty rabbits would be quite a nice number. But sadly, our place had become the meat department when the foxes were shopping . I hated that. As much as their digging irritated me, I loved those sweet, gentle, beautiful rabbits. We were so sad when the wife of our last couple disappeared & White Bunny, who mostly lived under my van, was our last rabbit inhabitant. Then one day he was gone too.

We have no holes in the lawn now and for the first time in 18 years, I was able to plant flowers last summer. But I miss my friends. And I miss that time in our lives when this farm was buzzing with kids & critters & chaos. Holes and all.

Today is Brian's birthday - if it were spring, I think I just might have bought him a Rabbit Couple.